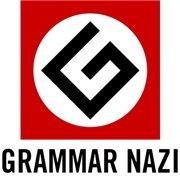 Is it just me, or do you also cringe when you read a long-winded paragraph by someone with a ton of typos? I realize that everyone, including myself makes typos from time to time, and for me, I find a lot when I first review a blog post, but some people make me wonder if they have ever picked up a book or have ever put in the effort to make their sentences appear semi-intelligent. An old co-worker of mine on Facebook decided to post a lovely political rant that was just so irrational and absurd that I had to chime in. Mind you, I rarely ever comment on politics, unless it's just outrageously stupid. She's a Mitt fan and misquoted his percentages as well as typed her entire thoughts like a kindergartner. There were new sentences that weren't capitalized, periods in the midst of sentences as well as words misspelled so badly that I had to reread it. I kept seeing her post in my feed a few times, but decided, nah, not worth it. But it gnawed at me. How can someone feel okay with posting an illiterate political rant? I decided to comment, "Math and grammar are so important, especially if you're a republican." That's how our argument started. Most of her words like, "you are" were spelled, "your" and the misuse of "their, there, and they're", etc. She called me a snob and that I didn't have to read her spews of hatred for Obama and of course, was free to move on. I told her that was the risk of posting political views on Facebook. Some will agree and some will disagree, and most will cringe over your lakc ov speliling...

Come November 7th, when all friends have broken ties over political debates and everything is said and done, the world will be a quieter place. Our timelines will be much more peaceful, and well, some of us will have less friends, at least on Facebook. Again, I wonder why people are so adamant about posting political crap when they know deep in their hearts, they want to rattle their friends' cages a little, but yet they don't want anyone to disagree with them. Going back into my memory bank, regarding this old co-worker of mine - I knew she wasn't the brightest bulb in the pack and had worked forever and a day at the same company in a small cubical the size of a shoebox. I really shouldn't have tackled her on the issue knowing how hardheaded and irrational I remembered her to be, especially when it comes to politics, but something about people posting public posts with bad grammar grinds on my nerves. She called me a "snob" and asked (and I'm copying and pasting this), "do you work??? or are you just a facebook grammer nazi? just wondering......." She can't even spell grammar correctly. As I sat there responding to her, I wondered the same question, "Why bother??" I then explained to her that I was a columnist and freelance writer, but then again, it felt like it wasn't a fair game at that point. But I had to.  She also stated, "And as far as my math and grammer, it hasn't affected my ablilty to work, so others don't have to. Your welcome for that."  Sadly, the job we used to have required customer service where if you had to type more than one sentence to make notes into their account, everything was abbreviated. For instance, (and this was mandatory for speed) if I ended a call with a customer and had to make notes, it would look something like this: "Cust tld me pmt wld be late. Waived chg & svc is back on. Left vm w/mgmt." ("Vm" being "voice mail".)

I don't know about you, but regardless if your job requires you to write complete sentences or not - even if you just had to pump gas, I still think it's important that reading and writing should be legible. Maybe it's the writer in me, but once I see someone who cannot spell for the life of them, (not talking about normal everyday typos here) I just cringe. I remember a long time ago when my friend was on Match.com, she would literally gasp at the way people had written their profiles. If you can't spell, get someone to help you, right? You're putting your best foot forward to make an impression and the lack of spelling is a sure sign of either not caring about appearance or intellect. And what's the first thing a woman notices about another person's profile? Appearance and some intelligence. But hey, maybe I am a grammar nazi and "snob" as she puts it. I just wish she would have insulted me with...proper grammar.  Oh, and please let me know if I made any typos in this post. Thanks.

For more of Deb's articles, please visit: www.debrapasquella.com or join her on Facebook and Twitter. Check out her cooking blog for some of her famous recipes!
facebook grammar illiteracy mindless people Mitt Romney political rants on Facebook politics Romney supporters stupidity