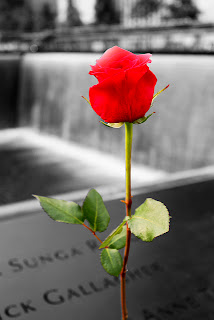 There's only so much I can really say about 9/11 that hasn't already been said. We've all remembered where we were at the time of the tragedy and how we felt as we heard about the second tower being struck. The annual memorial brings us all together to remember each and every person who lost their lives, but is it too much? I think about it and wonder how much of a heartache it would be for me if I had to go to my Dad's funeral every July 21rst. It's almost like the same thing. Yes, let us not forget, but also, not lose ourselves to grief once more and relive that terrible moment in time. I have mixed feelings. I watched the memorial on TV, and although I have come to terms over what had happened, I found myself crying as each name was called out, and especially the moment of silence for each plane that crashed. My question is: are the surviving loved ones ever going to have peace? Or are they going to continue grieving for something that had taken place eleven years ago? What about a general memorial where they honor all the victims at once? Wouldn't that make it less heart wrenching?

Between the various photos of the plumes of smoke billowing out from the buildings to even some where they have shown people diving out of windows ---- can't we all leave those awful images behind and just remember our loved ones as they were and not as they died? I don't want to confuse my opinion with forgetting what these evil terrorists have done, but sometimes less is more. This attack on the U.S. has brought out so much in us. It's brought out hatred for certain cultures and religions. It's brought out fear and intimidation even to just walk out onto New York City's streets. Yes, let's not let the terrorists win and go about our daily lives --- but really --- aren't we still a little scared? When will we leave it behind us, but continue to be strong as we pray for the families who have lost their loved ones in a senseless and hateful attack?