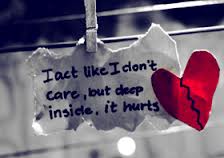 Betrayal to a woman seems to be more detrimental than it is to a man. Women are emotional creatures with softer hearts, or seemingly so. They absorb so much and at times, they never let the absorption dry up, or for a lack of better terms, forgive; to let go. Betrayal can be many things. It can be finding out your husband or wife cheated on you. It can be finding out that a friend has spoken unkindly about you to another person. It can be finding out that your secrets have been revealed by someone you trusted with all your heart. Forgiving and forgetting are sometimes hard to do. You can either forgive, but the forgetting part is still going to hold onto that heart of yours. So how can we truly forgive someone when we're finding it difficult to forget? Madelene asked me yesterday, "Oh, you still talk to her?" She was referring to someone who had betrayed my trust at one time. I said, "Yeah, it's okay. I just won't tell her anything personal, that's all." And it's sad, because there are a lot of things I would still like to chitchat about, but I just can't. I can forgive, but but but... forgetting is very hard to do right now. I keep in mind that if I tell her one thing, it'll be revealed eventually. Once the trust is broken, is it ever repairable? Is it enough to keep a 'surfaced' friendship if you can't talk openly and freely? Is it even worth the time or energy? I don't know. 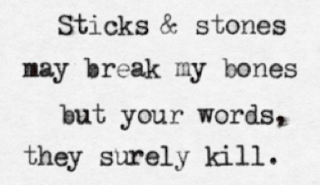 Then there are words. Words can hurt you more than physical pain at times. Words are often enough unforgettable in most cases, especially when they are directed at your character. Especially in anger, words can tear you down quicker than a gasoline soaked bamboo hut being lit by match. You can surely forgive them, but how will you feel about the relationship thereafter? How can you look at this person and respect them after all is said and done? Here are two concepts: 1. The person who is angry says things 'they don't mean'.  2. The person who is angry says all the things they actually really thought about you. So which one do you go by? Even if the angry person says, "I didn't mean what I said," but part of their insults had a bit of truth in it -- how can you determine how they really feel about you? And how can you still be friends with someone who thinks "that" of you? Hard call. As much as I'm an advocate for forgiveness, I'm also leaning on the side of 'forgiving and leaving the situation' as well. We're all human and I've said some things I have regretted in the past as well. That's the tricky thing with words: once they're said, you can never take them back again. You can say "sorry" all day long, but those words remain in the heart, sometimes forever. That person will never forget what you truly thought of them, even if you said, "I didn't mean it."  Why would anyone use false ammunition?