Showing posts from May, 2020
Show all

Your Mental Health During the Pandemic

Image Credit: TZIDO SUN / Shutterstock The other day I was watching Governor Andrew Cuomo use his new slogan, "How are you...really?" He was explaining how he was concerned with the overall mental health crisis that has risen a lot more since the pandemic. Mental health crisis lines have gone up 30% since March, and some people who have never even struggled with panic attacks or debilitating depressive episodes are experiencing this challenge for the very first time. You have to think about the life changes that we are all facing. Transitional "life changes" that affect us mostly are, death, divorce, loss of employment, moving, loss of home and financial problems. The COVID Reaper Many people are on social media airing out there opinions and whatnots. Some are downplaying the virus, while not having to experience the loss of a loved one to COVID-19. Most of the same types of people don't even know one person who contracted the virus. So, they start putti
Read more 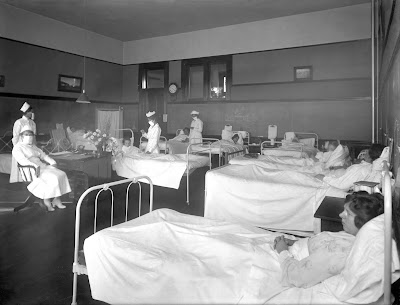 This room at Wilson High School in Pasadena was converted into a flu isolation ward during the 1918 Spanish Flu pandemic. (Photo courtesy of Mark Landis) We've all entertained the possibility of something devastating to hit the U.S. soil, no less the entire world, but I had imagined it a bit differently. If someone would've asked me before March of this year, "Something is going to wreak havoc on the entire world, including the U.S.! Millions of people will die,"- --I would've instantly thought maybe a nuclear war, or some sort of terrorist attack planted in each country, in each state and in each province. The thought of some virus or plague is more science fiction than anything else, but then again, we came close with the Ebola outbreak, and it's still happening in some parts of the world. There's even a section on the CDC website on what to do if there is a " zombie apocalypse ." FEMA also has a page dedicated to the "zombie apocalyps
Read more
More posts