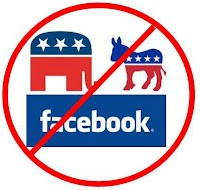 It's crazy how politics and religion can really make a difference in either developing friendships or ruining them. As they say, the worst thing to talk about with friends or new acquaintances is . . . and still, people do it. People challenge others to see where their political hats lie. It's personal. It's not something you can try to persuade someone else into seeing it your way because they have strong convictions about 'this' and 'that', while yours may be completely different. On Facebook, I'm surprised at how many people are so adamant about posting their strong political views --- even slapping the other 'party' in the face, which happens to be their own friends. Here's where it gets tricky... Okay, so it's a wonderful thing that you love your country and you want others to see how rotten 'the other guy' is. But if you really take a moment to step back, look at your Facebook wall --- aren't you only doing one thing, like challenging your friends who may have different views? Most people aren't even posting the good facts about their choice in candidates, but shit slinging the other guy to make others see the bad in their choice. If someone was only posting the positives about one candidate, then fine. I actually sit and take the time to read it. But when it comes to bashing the other one just to get more people on your bandwagon, I'm out. It's just as bad as me blogging about how awful any other religion is other than my own. I can share positive experiences about my religion, but once I dabble into the art of insulting those who worship a different god, it becomes a whole different game.

People are different. We all have different views and personal takes based upon our individual needs. Look at all the stuff thrown onto the political table: pro-life/pro-choice, the right to bear arms, marriage equality, taxes, healthcare and so on and so on. Each person has their own personal view of what they want the country to be like. It's never going to be the same for everyone. You will never win a political or religious argument ---ever. Years ago, I was very political, even opposing the majority of my friends. My importance was based on keeping this country safe, the right to bear arms and I was pro-life. These things were more important to me than my own rights of being able to marry legally. I said, "Well, I have power of attorney papers and a living will in case of an emergency with my partner." Years went by and I realized how different my views had changed. I'm neither Republican nor Democrat. I'm not political at all to tell you the truth because I have seen both sides run this country and I haven't seen much change other than crunch time months before election. The candidates do desperate things just to gain votes and well, I don't trust what any politician says. So these days, I keep my political views to myself and vote for the person who I think would be best for this country, although I know it'll be the same ol' same ol', in my personal opinion.  Why display my hatred for 'the other party' on Facebook if only I wanted to lose some good friends or acquaintances? It doesn't make sense. Speak highly of who you like, not shit sling the opposing guy out. It makes it look much more enticing if you want to show people who's best for the position.