- July 20, 2005
Living in a rural area, I have the luxuries of peace, tranquility, beautiful views of the lake, mountains and surrounded by trees, and of course—a few neighbors. In the beginning it was great, in the evening the only thing that made a sound were the crickets. It’s one of the benefits living outside of the city.

Well, that’s great on my part, however, now I have the wonderful young little neighbors on the other side retaliating against the neighbors with the dogs. First it was the ‘poppers’---which they would ignite those noise-making fireworks. This only riled up the dogs even more. They even went as far as screaming, “Shut your f*cking dogs up you’re a**holes!” This does nothing, absolutely pointless. Results—0….

During the 4th of July, fireworks were thrown into the area where the dogs were. This bothered me because it’s not the dog’s fault that they’re barking; it’s bad training on the owner’s part.

I decided to write my neighbors who own the two dogs an anonymous letter and attached an informative article on 'why dogs bark'....

I’m a concerned neighbor of yours that works from home. I realize that taking care of two dogs can be challenging, yet very rewarding as well.

I have noticed that your dogs are constantly barking. This occurs during the morning hours, the afternoon, as well as into the evening well past 10pm. It does disturb our sleep at times, and other times, it’s just a bit too much when we want to sit outside or have visitors over to enjoy the warm weather.

I do believe you work during the day time, but leaving your dogs outside all day barking ruins my concentration when I work.

I printed out a great article from the internet about dogs who bark constantly. Maybe this will shed some light upon ‘why your dog barks’. It could be an underlying problem, or even (God forbid) an illness. I am sure that you keep up with your veterinary visits, so I can only make assumptions at this time.

I also noticed the other neighbor’s response to your dog’s barking---which quite frankly is rude on their part and inconsiderate. Not only does the fireworks and vulgar screams across the neighborhood may annoy you, but it annoys the hell out of us as well! I’ll just chuck that up to *children* … I know that they are annoyed, but there are tactful ways to go about communicating. This neighborhood could get quite tense---it’s a shame that we all don’t get along as well as we should. I happen to know that the both of you are very nice people and would be understanding to our concerns.

In any case, look over this article that I printed out for you; I hope that you’re not offended in any way; I just would like to be of some help to you if I can. I happen to be a dog lover and would like to see your dogs happy and content. I was even thinking about sending over some playful toys for them to be occupied- if you didn’t have any lying around their huge pen. (I’m sure you do)

I hope you enjoy this wonderful weather, and have a safe and wonderful summer!

After I wrote this letter (about a few days later)------I got my crickets back, I got my sanity back, and my neighbors?-------They are at peace, because there are no fireworks flying past my head to get to the neighbor’s dogs.

Amen! I can sleep now! I just ordered some toys online for the two German Sheperds, but really, for the owners as a way of thanking them.

My point? I guess I was like my ‘little retaliating neighbors’ in the past, where I handled situations in a way that would only feed the fire more, I learned from that, knowing that you only get burnt when you try to retaliate.

Makes for a tranquil neighborhood. 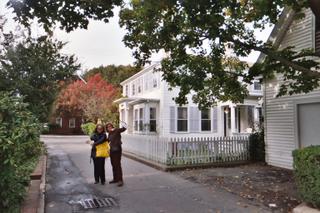