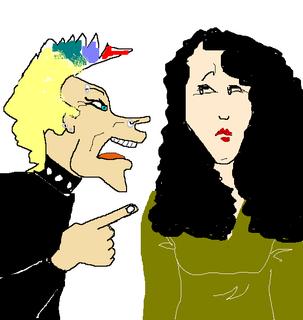 “You’re not one of us! You’re a phony! Get out of our group!” My fellow gay community chants as they hear my political and religious views. What do they care anyway? I can’t have a mind of my own? I need to mesh my brain with a bunch of gay & lesbians and become a “Stepford Dyke?” The fact that I am Christian throws them off—“How can you be Christian when they call us an abomination to God?” I just respond, “Well, have you lied? Gossiped? Kissed a married woman? Merely “thought” about a married woman? Do you eat shellfish? Did you ever try ostrich? Ever disrespected mom or dad? Ever blurt out God’s name in vain?” If you answered yes to any of these questions, then my belief is, everyone falls short due to inadequacies. It’s in the bible, those are all sins…We can't be ‘perfect’ like God—so that is why He brought His only son to us, to die on the cross. He took our sins away- and ~in my belief~ I am saved. Well--go on, throw the first stone!

How is loving a person of the same sex be ‘wrong’? Love is love. As for me, and my own preference, love is love regardless of what gender it may be. I know that people can debate that, but, that's just my thoughts and beliefs. Then I throw my right wing views on things, and that’s it, they run. It’s kind of a self-defense mechanism now. How can these lesbians want to be accepted when they don’t even accept their own kind? They’re walking contradictions---hypocrites!

My partner and I go to Provincetown, MA every year. It’s a big gay community with a lot to do. Everywhere you look, rainbow flags, pink triangles and the word “pride” plastered up everywhere. Why has the word “pride” become apart of our community? Pride to me is a negative way to look at our community.

Do we really want to send that message out to everyone? I’m not backing that one up. 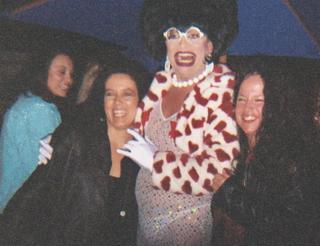 The village of Provincetown is nice though, you see a lot of different people, drag queens, campy-type men walking hand-in-hand freely on the streets as well as lesbian women walking around excited to be in their own environment; without judgment. I live in a small conservative town, so God forbid I should hold my partner’s hand in public, they would throw me in a church, lock the door and throw away the key!
Here's a shot above, of Madelene, Miss Richfield and myself after her- (his) comedy show. 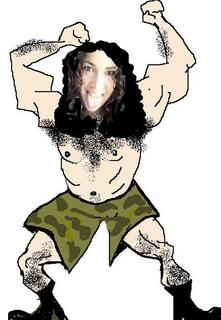 I’m not quite sure I understand how my fellow lesbians think. I get the “Oh you don’t look like a lesbian…you have long hair and you’re feminine.” I get upset with these remarks, even done in jest. Why do I need to be wearing a pair of Timberland boots, Docker pant, a wife-beater guinea tee and a bandana 24/7---just to prove I’m gay? I’m sorry, but it is not me. Once in a while you can catch me in a bandana while I’m cleaning or outside, but that’s it folks! Maybe one day I'll surprise them in a butch get-up, maybe they'll accept me a bit more? Hmmmm...the picture above indicates that there is way too much testosterone for me to handle....here's a picture of my head on a tough-guy's body that I drew up... Scary, huh?

My friend Lisa and I were in Provincetown, and noticed that a lot of these women, let me retract that—MOST of these women were obese! We couldn’t figure this out. We looked around, and there was not a thin feminine woman in sight. NOT that there is anything wrong with this appearance, we just found it strange. My girlfriend kept wanting to go on the Whale Watch, “Come on guys, let’s go whale watching, come on!” Lisa and I looked at one another, “Umm, we got some right on land…”

It was so odd on that vacation because Lisa was rooming with this girl Sequanda that treated her like a mother! This girl was not romantically involved with Lisa, in fact, she had a girlfriend at home. They went as friends. God forbid Lisa should stay out past her bedtime--that was it---she would get yelled at. One night after going out to the bar, everyone would come back to my suite for a little ~after party~ to have a drink. I told Lisa, “Let’s see what Sequanda will do if you came home looking all disheveled." I took her in the bathroom and rearranged her buttons on her blouse and messed up her hair---teased her hair so high as if she had been rolling around in someone’s bed all evening in ecstasy. When she got home, she was reprimanded and then got the lectures. It was quite amusing. Poor Lisa had to room with this woman, but I think she did it merely for my entertainment.
Here's a shot above of what I made her look like...

She is going to kill me after posting that picture up! This may be my last blog ladies and gentlemen!

Well this year we’re going back. We’re heading out with a bunch of women. I don’t care if someone wants to dress up in full butch attire, or if they want to prance around in a feminine dress—I accept people for who they are. I just hope that this time, people don’t judge me and ridicule me for wanting to appear as a girl. They either call me “bi-curious, confused, phony, too femme, and straight.” I wonder if my partner of eleven years knows about this. I think she’ll be quite surprised!