Your Earbuds Are Too Loud! --Sincerely, Mayor Bloomberg 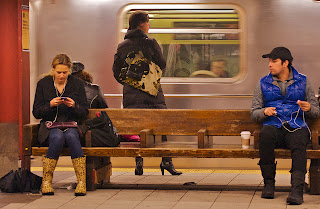 New York has been thrown some pretty wicked curve balls lately, having dealt with Hurricane Sandy and the recent blizzard that dropped more than 3 ft of snow on us. People in Staten Island are still picking up the pieces, some are homeless and others trying to rebuild and repair their houses. They are still in need of help. This morning when I turned on the news, I was outraged a bit annoyed over the fact that Mayor Bloomberg has his priorities up his wazoo again. First he was on a mission to ban big sized sodas, and now he wants to spend $250,000.00 on "raising awareness" about the dangers of listening to your earbuds at high levels, especially in public or on the subways. "People are annoyed."  People are annoyed with the idiotic attempts to ban things that aren't New York's biggest concerns. How about putting that $250k into helping the victims of Sandy or to help "raise awareness" about all the rapes, murders and drug dealers out on our streets? I can see raising awareness, but why does it have to cost $250k? Just his statement alone, and the fact he can tweet his concerns to his 454,821 followers on Twitter is enough to start a trend. But no. We have to spend $250k, instead of giving that money to people who really need it - homeless people - the victims of natural disasters - Red Cross - maybe even, dare I say it, higher pay for our NYC police, EMT and firefighters.

Let's highlight some "annoyances" that we can "raise awareness" over. What about people talking loudly on their cell phones? How come we can't ban that? What about "raising awareness" on Bloomerg's attempt to speak Spanglish? They even have "Miguel Bloombito" mimicking Bloomberg's Spanish on Twitter: 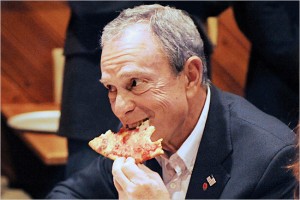 Ok, maybe I'm taking this a bit too far, but you can see my frustration over the lack of importance Bloomberg's issues are. I guess $250k is just a drop in the bucket for 'Bloombito'. It just seems as though Bloomberg wants to mess with people's joys in life ---"Argh! Take away their big gulps!" "Argh! Take away their music they love to listen to in the subways!"  It's not the big gulps causing obesity, maybe it's the bad choices we make - the fact that one meal at McDonalds or KFC can be over the daily caloric limit. There are dinners at TGIF and Ruby Tuesdays that are over 2,000 calories! Pizza alone is probably the most fattening of all. When I worked for a pizzeria, they used lard in their dough. Most private pizzerias still do this. Why not ban that? His law didn't even go into affect for 7 Eleven. They're still selling big gulps. Now, we can't get 2 liter sodas, which are usually used for multiple people, like when you buy pizza and you want to grab a 2 liter soda --- that's usually not for one person. I don't understand any of his methods used to "raise awareness". Last I heard, America was a free country, and if we want to destroy our bodies with this crap, then let us make that choice. If we want to deafen ourselves with loud music on the subway just to ignore the yelling and screaming going on around us, then let us. Why are these such big issues? New York has a lot more to contend with. Do your job, Bloomberg and stop friggin' with people's lives and let them enjoy their day.