Through having spoken to many bisexual women, I'm finding there's a fine line between the labels of "bisexuality" and "polyamory". Most of the LGBT...and I guess we're adding the "Q" for queer -- they frown upon bisexuals simply because it's like a slap in the face for the lesbians. Like, 'have your cake and eat it too' type of mindset. Are they confusing bisexuality with polyamory? We all want acceptance, whether gay, lesbian, transgender, but once bisexuals want the same acceptance, we seem to fling it out the window as this horrifying attempt to make excuses to cheat on your spouse. For instance, would you think it was cheating if a wife strayed on her husband with another woman? Depends, right? For me, I see no difference, unless of course it's a polyamorous lifestyle. What about women who are truly bisexual, yet monogamous with whoever they made a commitment with? It seems unfair that many people of the lesbian community have shunned the bisexual community for simply being themselves - for the mere fact that their attraction has little or nothing to do with their gender, but for who they fall in love with. 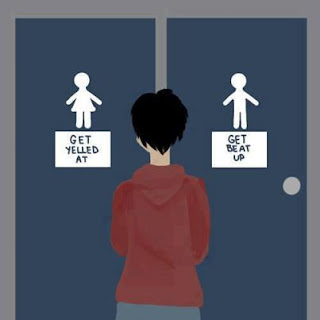 I know I've spoken about this before, but the brunt of the shuns given to transgender women are usually from genetic lesbian women. An MTF (Male to Female). It's kind of odd since this has been around for centuries, and only has really hit its peak during the last 10 years or so due to more options, hormones and surgical procedures to make it happen much more than it used to. Here's another kick in the stomach by the lesbian community if a transgender woman happens to be a lesbian: "It's a 'man' invading our community!"  I know men go through a lot to be with lesbians -- but come on. Really? It's disheartening to see so much discrimination against transgendered people who have to deal with closed-minded people of the alternative lifestyle. "Alternative lifestyle" -- remember when they used to refer to us as that back in the 90's? You were about to yell at me, I could feel it. An old friend of mine who is a transgender woman had written an important piece on my blog, which you can read the full article here, but she states, "A 'secure' woman – lesbian or hetero, or a 'secure' man, gay or hetero does not have sexual identity or partner issues. They are far from questioning another’s choice, or need to live life in the way they need to live it. They simply are, - without thought or verification, or discrimination. A transsexual woman actually has no choice in her sex Identity. She pretty much also has little 'choice' in her feelings about a sexual partner. It is identical to a genetic female’s feeling of 'being' lesbian or hetero or whatever. The transsexual will feel identically 'lesbian' etc. The thought of her as 'different' - a transbian - is discriminatory, and misogynistic in the perception of her as a man with a woman’s body. This is so far from the truth, that it could not be more obvious. She could only want her female body because of being a woman in the first place and in the first person. She is not a transbian. She is simply as true a lesbian as a genetic woman."

It's amazing how many people aren't familiar or exposed to different lifestyles, whether due to upbringing or living in the sticks, where there's only a tiny deli and an old gas station 20 or more miles away, but each and every day, I do feel it's getting better for all of us. For now, I can only hope for more peace, love and understanding and umm, lots of wine...yes, wine. I'm such a hippy.

For more of Deb's articles, please visit: www.debrapasquella.com or join her on Facebook and Twitter. Check out her cooking blog for some of her famous recipes!
acceptance for all FTM gays gays and lesbians lesbians LGBT MTF NOH8 peace polyamorous polyamory transbian transgender