Nothing Less Than Wonderfully Perfect in God's Eyes 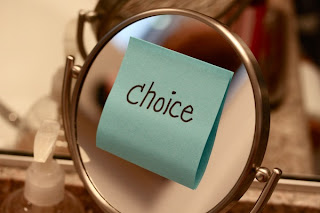 Is it so bad if it was finally discovered, revealed and scientifically proven that being gay, lesbian, bisexual, heterosexual or transgendered was all but a choice? Even for myself, I sometimes want validation for my decision of being gay, for deciding not to go with the husband, kids, big house on a hill with a white picked fence three dogs in the yard kinda' deal, but everything is always in the gray area. I don't have a problem with my "preference" - my "choice". Didn't God give us choice? Mom always said it would be a harder life, but when I look around at all my friends, my family and other people who have the life people "should" have, it doesn't look so easy to me. And not that I want the easy way out, but I was never ridiculed by any of my friends or family for being gay or having a partner of the same sex. Other Christian people, yes. See, the discrimination that comes in all colors also includes other groups, like minorities and interracial couples. A long time ago I remember my dad telling me that if I were to ever date a black man, that it would be extremely difficult to be seen in public with him. (This is before he knew I was gay.) Where would we live? The neighbors would shun us and we would be looking out for our lives due to the bigotry. That was always engraved in my mind. While that may ring true in some cases, in some places, I'm not quite sure that would be the case at all, if I had chosen that path - and if I had fallen in love with anyone of any race or gender. I used to defend myself to discrimination of other people by saying, "Why would I choose the harder path in life?" For me, the harder path in life would have been being with someone just to conform "properly" with society's view of what's "right" and ultimately, hurting the man who had made a lifetime commitment to me.

There are other things that I feel is a choice that people may cringe over. Now hear me out... We are evolving every single day. My feelings from the past ten years or so have changed a great deal, and I'm okay with that. My political views, my religious standpoints --- were all tweaked one way or another, or perhaps influenced by learning a bit more from either other people, or just reading in general from various sources. Is it a choice or is it a genetic thing to be transgendered? What do you believe? As early as I could remember, I remember I always wanted to be a boy. I'm not even talking being a tomboy or my love for boy's clothes --- I wanted the full package if you will. I wanted to be entitled the right to have a little girlfriend of my own and to have everything, the life and the physical attributes of being a boy. I didn't want to be a lesbian. More importantly, I didn't want to be a girl. It had nothing to do with my sexual orientation - it was what gender I wanted to be. I used to secretly pray to God at night to wake up in the morning being a boy and having all the 'boy parts'. I would wake up, run to the bathroom and be highly disappointed. I thought, maybe...just maybe, it would be like the fairy godmother and she would grant me my wish either under my pillow (God forbid) or, in my underwear as a gift. None of those wishes were granted. It wasn't until I was about 12 years old when a friend (who I had a crush on) introduced me to styling my hair, doing my makeup and putting on girly clothes. When she said, "Wow, you. look. beautiful!" ---that was it. If the pretty girls like other girls to look like a girl, then maybe being a boy isn't so important after all. So, I chose to remain a girl. I chose not to try and alter my physical appearance to mimic a boy's. And, not that there is anything wrong with a woman appearing as a butch, or as a man, it was just my choice to dabble into my femininity. It wasn't until I tried, that I knew for sure, this was definitely a better choice for me.

We're all changing in our own ways. We're all evolving, conforming, transforming. It's a never ending learning process. Some are extreme, while others, not so much. Take for instance, a mature woman wanting to change the look of her face. She wants a face lift so she'll look different, younger, more attractive and desirable. There is nothing wrong with that. If it makes her feel better about herself, then by all means, who are we to judge? But, you don't hear that woman saying, "Well God didn't intend for me to have this double chin and no cheek bones." What about the woman who finally realizes she wants a bigger cup size? It's a choice for her to transform her A cup to a C cup. All of these transformations are choices. Everything we do in life is a choice. You were born white. You were born black. You were born a male or female. Those are genetically correct. After that, everything we do becomes a choice. Everything everyone is, or whatever they become, whether it's a choice or it's through genetics --- it's all a beautiful thing. Perhaps the validation of "we were born that way" gives us more acceptance from others and unaccountability for what we chose in life. Why not step up and say, "I chose this life, not you. I chose ME to be nothing less than wonderfully perfect in God's eyes."

For more of Deb's articles, please visit: www.debrapasquella.com or join her on Facebook and Twitter. Check out her cooking blog for some of her famous recipes!
being gay is a choice bigotry FTM gays and lesbians LGBT MTF queer transgender transgendered we were born this way