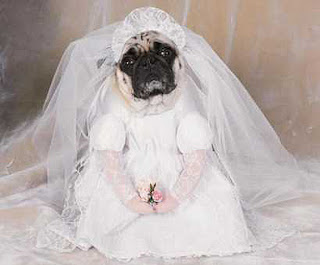 It truly amazes me how some people view gays and lesbians. Since yesterday, I have been reading threads upon threads on mostly those who agree that the LGBT community should be able to marry the person they love. I have also read comments from those opposing marriage equality. For instance, one man stated, "Well, if you let this sort of thing happen, then 'other groups' will want to marry. It will happen." What other groups? As I read further into other angry posts, another person said that some people will want to marry their relatives, underage minors (pedophiles) and even went as far to say pets. The more I read these outrageous responses from your typical 'everyday normal citizens' --- I actually wondered what the people around me really thought of it. You know, years ago if you said something positive about the gay community, or dare I say - you were gay in a company that was a bit more conservative, you could have been fired for it. Now, it's more of a crime to be antigay or say something negative about the LGBT community. It's due to the zero tolerance that many companies and businesses are engaging in thankfully. With that being said, the ol' bigoted mindset is still very much here. Look what happened not too long ago with Chick-fil-A. Once it was known that the owners of the chain were antigay -- tons of people came out of the woodwork to show their support for their antigay statements. I felt so incredibly sad to see the honesty come up to the surface. 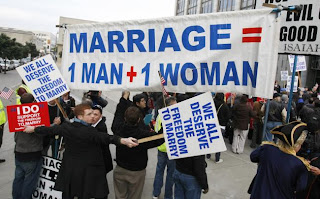 You know, it's not like we're saying to the world, "OK, now you have to deal with us, accept us, love us, hug us and support us." What we're saying is --- we just want the same rights as everybody else. We are not pedophiles. We are not into incest. We do not support bestiality --- we are human beings of the same sex who want equality. We are consenting adults - not "rapists", "murderers" and "pedophiles" as many Christians claim that's what we are equal to in God's eyes. We get blasted with "Children need a mother and a father." What about single parents -- fathers or mothers who beat their children? What about children who grow up only knowing one parent? I know many of my friends who grew up in a one parent household and grew up to be wonderful and successful people. That's not the point. The point is, other people's fear of gays and lesbians (claiming it's just morally correct due to their religion) is making it hard for others to live their lives. Get your religion out of our marriages and unions and focus on God more. Focus on the fact that God will deal with us if that's what you believe. You're not the one marrying a gay person - so why are you so concerned about us?  If your religion is so "full of love", then why are you spewing out so much hatred? Live and let live.

For more of Deb's articles, please visit: www.debrapasquella.com or join her on Facebook and Twitter. Check out her cooking blog for some of her famous recipes!
bestiality bigots gay marriage gay rights LGBT marriageequality prop8