Get Your Interpretation of Religion Out of My Marriage 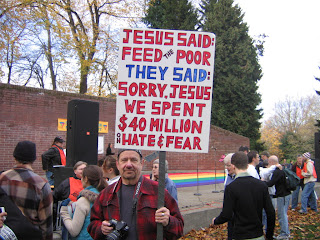 So your religion says that "gay marriage" will ruin the sanctity of marriage. Your religion says that two men together or two women together is an abomination to God. Your religion tells you a whole lot of things. Your religion also tells you to steer clear from shellfish. Your religion tells you that you shouldn't shave your beard. Your religion forbids you to have tattoos. Your religion tells you that premarital sex is a sin and yet you don't follow your religion's rules, but you're okay with judging other people's lives, and you're also okay with ruining other people's lives by instilling your religion and 'thought to be' morals upon other people's relationships. You want to stop gays and lesbians from marrying, while the sanctity of marriage has already been ruined by many straight people, including celebrities and those who take marriage for granted. You seem to be okay with the fact that so many people get a divorce over the slightest problems. Infidelity is okay too, but two people of the same sex in a loving relationship who want to have the same rights as anybody else is just completely wrong. Fifty years ago, you tried doing the same thing to interracial couples. It was illegal for them to marry due to your religious rules. You wanted to impose your "morals" on them and deny them their rights. Remember that? It's funny because I'm of Christian faith. Please tell me where in the Bible Jesus says that being with someone of the same sex in a loving relationship is a sin. Every single scripture that refers to homosexuality is either in the Old Testament (as eating shellfish was too)  as in Leviticus or in the New Testament where the only references made were in terms of promiscuity for both heterosexuals and homosexuals. Get your facts straight, read your "good book" and maybe focus on bigger issues other than people who just want to love one another in a legal marriage like anybody else.

For more of Deb's articles, please visit: www.debrapasquella.com or join her on Facebook and Twitter. Check out her cooking blog for some of her famous recipes!
gay marriage gay rights homophobes homosexuality LGBT marriage equality prop 8 proposition 8 republicans