The Westboro Baptist Church Takes it to a New Low 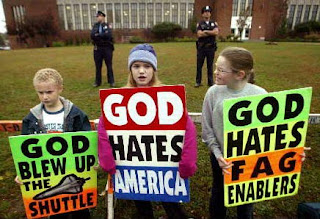 If this religious group hasn't hit an all time low yet, this is certainly their most disgusting of all protests. They're planning to picket a vigil for the victims of Sandy Hook Elementary School. They're known for picketing at soldiers' funerals and mostly against homosexuality, and of course, their enablers, or as they would say, "fag enablers". Religion has brought people together as well as tear them apart. One of the reasons why I'm scared of the Bible in some cases, is because the scriptures are sometimes taken out of context, misinterpreted and some of it is 'old school' methods that are scarier than we'd like to admit. Before I get into the biblical scriptures that may have backed up Adam Lanza's reasoning for his attack, I have to comment about something I do believe in: evil. As a Christian myself, schizophrenia or any other "mental illness" is sometimes confused with being possessed by demons. I know, I know -- "Demons, Deb? Really?"  Yes.  What explains a 20 year old boy thinking he has to kill 20 innocent children that have nothing to do with his life? What explains his mission? When someone hears voices, or has "schizophrenia", (if he does) it can be misdiagnosed. Don't even blame it on autism -- has. nothing. to. do. with. it. The fact is, no matter what, not even Christians will believe in being possessed by the devil. If you have faith in God then you probably have faith in the devil and hell. If you believe people can speak in tongues or have spiritual experiences, then why not believe that people can experience an evil spiritual experience?

Look at what the Bible says about killing children and gays. This is what the Westboro Baptist Church interprets the Bible to say. They believe that it's okay to kill children of sinners, "perverts", gays and those who speak to them which to them are called "enablers". Look at these scriptures that are taken literally, and some that are very extreme. You might want to scan through this garbage, but my point is -- it's in there.

Kill Sons of Sinners Make ready to slaughter his sons for the guilt of their fathers; Lest they rise and posses the earth, and fill the breadth of the world with tyrants. (Isaiah 14:21 NAB)

God Will Kill Children The glory of Israel will fly away like a bird, for your children will die at birth or perish in the womb or never even be conceived. Even if your children do survive to grow up, I will take them from you. It will be a terrible day when I turn away and leave you alone. I have watched Israel become as beautiful and pleasant as Tyre. But now Israel will bring out her children to be slaughtered." O LORD, what should I request for your people? I will ask for wombs that don't give birth and breasts that give no milk. The LORD says, "All their wickedness began at Gilgal; there I began to hate them. I will drive them from my land because of their evil actions. I will love them no more because all their leaders are rebels. The people of Israel are stricken. Their roots are dried up; they will bear no more fruit. And if they give birth, I will slaughter their beloved children." (Hosea 9:11-16 NLT)

Kill Men, Women, and Children "Then I heard the LORD say to the other men, "Follow him through the city and kill everyone whose forehead is not marked. Show no mercy; have no pity! Kill them all – old and young, girls and women and little children. But do not touch anyone with the mark. Begin your task right here at the Temple." So they began by killing the seventy leaders. "Defile the Temple!" the LORD commanded. "Fill its courtyards with the bodies of those you kill! Go!" So they went throughout the city and did as they were told." (Ezekiel 9:5-7 NLT)

God Will Kill the Children of Sinners If even then you remain hostile toward me and refuse to obey, I will inflict you with seven more disasters for your sins. I will release wild animals that will kill your children and destroy your cattle, so your numbers will dwindle and your roads will be deserted. (Leviticus 26:21-22 NLT)

More Rape and Baby Killing Anyone who is captured will be run through with a sword. Their little children will be dashed to death right before their eyes. Their homes will be sacked and their wives raped by the attacking hordes. For I will stir up the Medes against Babylon, and no amount of silver or gold will buy them off. The attacking armies will shoot down the young people with arrows. They will have no mercy on helpless babies and will show no compassion for the children. (Isaiah 13:15-18 NLT)

Infidels and Gays Should Die So God let them go ahead and do whatever shameful things their hearts desired. As a result, they did vile and degrading things with each other's bodies. Instead of believing what they knew was the truth about God, they deliberately chose to believe lies. So they worshiped the things God made but not the Creator himself, who is to be praised forever. Amen. That is why God abandoned them to their shameful desires. Even the women turned against the natural way to have sex and instead indulged in sex with each other. And the men, instead of having normal sexual relationships with women, burned with lust for each other. Men did shameful things with other men and, as a result, suffered within themselves the penalty they so richly deserved. When they refused to acknowledge God, he abandoned them to their evil minds and let them do things that should never be done. Their lives became full of every kind of wickedness, sin, greed, hate, envy, murder, fighting, deception, malicious behavior, and gossip. They are backstabbers, haters of God, insolent, proud, and boastful. They are forever inventing new ways of sinning and are disobedient to their parents. They refuse to understand, break their promises, and are heartless and unforgiving. They are fully aware of God's death penalty for those who do these things, yet they go right ahead and do them anyway. And, worse yet, they encourage others to do them, too. (Romans 1:24-32 NLT)

The written word has been taken on a whole new level. Or is it new? What if religion was to become part of politics (and I say this as a believer) --- would it be okay to kill those who aren't following "moral rules" or the "sons of sinners"? In earlier primitive times, they would kill the children of those who committed crimes so that the kids who would grow up wouldn't seek out revenge. There are so many reasons in history about the murder of innocent children. When it comes to the "ancient bible" --- it makes me truly want to steer clear from any religion whatsoever. But if God is the same yesterday, today as he is forever, then do these rules still apply? Do these scriptures still tell us it's okay to kill? Has society stomped out these rules? That's in the mindset of these crazy bastards of the Westboro Baptist Church. If you really dwell on what they are meditating on --- the ancient written bible --- not the New Living Testament or anything that has been translated again and again --- is religion in fact, evil? Do you think Adam Lanza had a similar viewpoint? Do we even know what his religion was or if he had some sort of vengeance for the parent(s) of any of these children? I'm not saying that this is the case, but by process of elimination of the reasoning behind such an evil evil act, you have to wonder. If it's the motive of the evilness behind The Westboro Baptist Church, can it be the same for Lanza?

For more of Deb's articles, please visit: www.debrapasquella.com or join her on Facebook and Twitter. Check out her cooking blog for some of her famous recipes!
at December 17, 2012