Mental Health is Too Expensive, But What a Great Dental Plan! 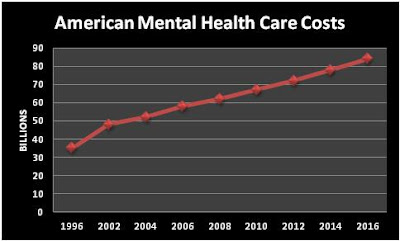 You raise your child, love them, feed them, make sure they're warm at night, try to get them to school safely and then this shit happens. After 5 or 10 years, all your love, your hard work and effort --- your heart --- all gone just because some mentally deranged bastard decided to unload his gun on your child right before Christmas. You have no one to be angry at. The killer is gone. There's no one to unload your fury on - not one person to scream at - it's all on you. There are no trials or hearings to go to in order to put this bastard into jail for life and make him pay. There's no revenge - it's just you and your thoughts. You pray he goes to hell, and then, you question if there is a hell. You question if there is a God, and if so, why would God let this sort of thing happen? You can't even say or possibly think "it was their time" --- at the ages that range from 5 - 10 years old - it can't be their time. They had so much ahead of them.  I spoke to a woman working in the hospital yesterday as I was getting pumped up with fluids from being sick. She was rambling on about the 5 second piece of news she had heard while walking past the break room. "Oh it's usually some kid that was bullied." She didn't even realize it was in an elementary school.

You can be a deranged psycho killer with great teeth because for starters, mental health is way too expensive, but hell, your insurance has a great dental plan. Some man in China wounded 22 children and one adult in a stabbing attack. The New York Times reads, "No motive was given for the attack, which resembled a string of similar assaults against Chinese schoolchildren in 2010 that killed nearly 20 and wounded more than 50. The most recent such attack took place in August, when a man broke into a middle school in the southern city of Nanchang and stabbed two students before fleeing. Most of the attackers have been mentally disturbed men involved in personal disputes or unable to adjust to the rapid pace of social change in China, underscoring grave weaknesses in the antiquated Chinese medical system’s ability to diagnose and treat psychiatric illness."

What do we have to do in order to keep our kids safe? Do we need to have a military type of security at the doors of every single school? Great. Taxes go up. Do we have to homeschool our children? It. does. not. matter. If a killer wants to seek revenge, there are plenty of places where they can unleash their fury. I remember a while back when I was working for a phone and internet company where a man got so irate over his phone being turned off due to unpaid bills, that he threatened to come to our office and kill every one of us. He did come in...with a box cutter and threatened the receptionist. He wanted her to open the doors that led into the call center, where a hundred or more reps were sitting in their cubicles doing their work. I always had a "disgruntled employee plan" --- I'd turn the overhead lights off, shut my computer down and crawl under the desk and pull my chair in so it looks like no one is there. I'm not sure if it would work, but running wouldn't. Thankfully, security had to tackle the man down and restrain him until the police came to pick him up.

The world's gone mad. This has never happened so frequently --- or at all for that matter. And now, with social media and the internet giving more ways and techniques on how to kill more effectively, it gives them more ammunition, more plans, more avenues...  We're screwed as a society. I will never, ever have a child in this world. I would never want to bring up my kid in a world that is absolutely nuts -- where mental health is not a "serious medical reason" for insurance to pay for. Who has $200 to sit in a psychiatrist's office or even pay for the necessary medications that are way too much for the average budget? Most of these madmen are usually sitting in their mothers' basements plotting huge killing sprees and perhaps a few pipe bombs. When is it going to end? When will the government, the medical insurances - the world figure out that - YES - mental health IS important. It's important because not only will it help someone you love with a mental illness, but it may just save your own child or yourself from being murdered by someone untreated. I wouldn't mind of the Mayans are correct. I'm ready to blow this popsicle stand.