Mental illness is thrown around so much these days, as well as the pills that are prescribed for each diagnosis. I truly don't know what to think other than this has never happened before the 90's. I can't blame it on a single thing, neither can anyone else. You can have all the guesstimations in the world, but none will tell you the entire story. What are the ingredients for a killer? The 'profiling' class example are the kids who are loners, bullied or awkward in some way. If an outcasted kid is that depressed, would he even care about his own life? And if he doesn't care about his own life, will he care about yours? Will he care about your children's lives? Of course not. And to top this guesstimation off -- add a dash of revenge into the pot. In today's world, kids aren't only suicidal - they're homicidal as well. It's not just 'oh woe is me' - it's more like, 'woe is me and I'll get you back for your happiness and joy in life'. So plop a ton of anger onto the loneliness, depression, the awkwardness and the bullying. That's explosive. Can it get worse? Sure. Add the media coverage of all the shootings from day till night emphasizing that "this was the biggest massacre yet". The loner thinks, "Well I can think of a better and bigger massacre." Those are the ingredients in my unprofessional guesstimation. 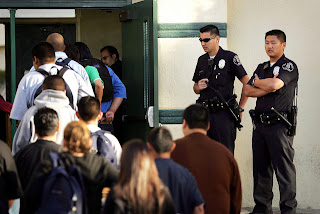 The NRA wants to place armed guards in every school. Didn't help Columbine High School all that much. It may have slowed the killer down, but not only did he shoot people, he shot the guard as well. The killer isn't necessarily going to walk into the school as an outsider. He's most likely inside, from within. So how is a guard supposed to stop a premeditated killer who has already plotted and schemed his massacre? He already knows the guard is there, so wouldn't he have a backup plan for him too?  I wonder if the NRA thinks about this much. Their logic is questionable. While I'm all for the right to bear arms to protect your home and for sportsmen and hunters, I'm also concerned about the lack of background checks and semiautomatic weapons. If you're protecting your home, you do not need a semiautomatic. One shot will do. If you're not good at shooting, then you should not own a gun. It's that simple. I don't understand how placing a guard in every school is going to help. While we all want to keep our kids safe, there is nothing that will protect them from an unpredictable kid with a plan, not even a guard. And how much more do we have to pay for guards "protecting" our kids?

For more of Deb's articles, please visit: www.debrapasquella.com or join her on Facebook and Twitter. Check out her cooking blog for some of her famous recipes!
Columbine guns guns in schools mental illness Newtown NRA NRA Logic school shootings