And You Wouldn't Know it 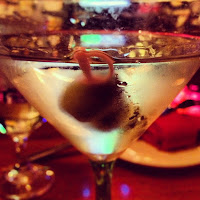 On Christmas Eve, Madelene and I have a little tradition that we never break. We go to our favorite restaurant, sit at the bar, order a dry martini straight up with olives and an antipasto for two. We then head off to my sister's Christmas Eve party. While sitting at the bar this year, we noticed two older men at the way corner end and a few stragglers to the side of us. The female bartender was swamped with orders from the tables as well as right in front of her. She couldn't pour fast enough. She looked like she was ready to throw in the towel. I said, "Come to the other side of the bar and have a drink with us," - in jest of course, and she said, "Ugh God I wish!" It wasn't even minutes later when the old man sitting over in the far corner screamed out, "Goddamnit! This is the worst Manhattan I've ever tasted! Are you kidding me?" -- He went on and on about it. A sufficient, "Can I have another drink, this one isn't very good" would have sufficed, but he made sure that this bartender felt like a pile of crap. When he was finally muzzled with another cocktail, I heard him complaining loudly about his wife's procedure at the hospital that went terribly wrong. She passed away due to malpractice right before Christmas. He used colorful words to describe the lack of compassion the doctors had when giving the gentleman the bad news. He was brewing with anger and sadness. How horrible to lose anyone you love during the holidays. 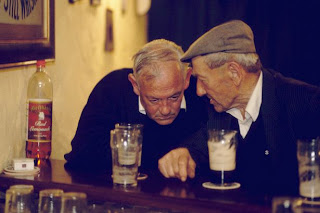 I can give you a slew of sad sob scenarios to "make excuses" for one's less than desired behavior, but in reality - is it acceptable? In my opinion, you either have to be a really evolved soul or just immune to the bullshit people will pour onto you, especially in a bar. I was impressed with the way the bartender handled it. "Oh sure, not a problem! I'll make one for you right away and you let me know if that's okay. If not, we'll try something else, okay?" She was so accommodating and ignored his nasty remarks about the drink. That takes a lot of inner strength to do what she did. She treated him even better than before - making sure his soup was hot enough and that his appetizer was to his liking. She spoiled him, and in return, he smiled and said, "Thank you so much, dear." He needed that reassurance that there are compassionate people out there. He needed some generous soul to fix the pain he had inside, although it'll probably never be "fixed" --- but a soothing response especially on Christmas Eve with his wife no longer by his side was probably what the doctor ordered. When she walked past me, I said, "You're just amazing."  She giggled while pouring another drink for another customer and mumbled out, "You have to be in this line of work." But she's wrong ---- you don't have to be. You have a choice: tell it like it is and make the drink even worse, or go beyond the call of duty.

It's so important this time of year to soften your hearts, forgive one another and show the ones you love how much you care about them. There are so many people going through "invisible" illnesses, like severe depression, PTSD, bipolar disorder and overall life circumstances that make it even worse. Love one another and remember how fragile the toughest person can be. If you choose to intentionally hurt someone over the holidays for a valid reason or no reason at all, keep in mind the emotional factors or hidden mental illnesses one can have. Keep in mind the trials they're going through or perhaps their loneliness. Sometimes, that person has nothing to lose to attack you back tenfold. I'm not saying "be nice" so people won't take revenge out on you, but be careful about the ones you may hurt over the holiday season. It can be the last straw for them. We live in a society where opinions fly freely and our patience runs out quickly. "We don't have time for this," or "I can't be bothered" may fall out from your lips. But when it comes to, "He/she deserved what was coming to them" --- you can be the end all be all and never even know it. We don't know what people are going through or what level of sadness or rage they have going on. Everyone is a reflection of who you are. Have you ever heard the theory of whatever you don't like about a person is what you don't like about yourself? I truly believe that. So get out there and do something nice for someone, or at least, respond appropriately, and lovingly.

For more of Deb's articles, please visit: www.debrapasquella.com or join her on Facebook and Twitter. Check out her cooking blog for some of her famous recipes!
anger compassion depression depression on the holidays SAD forgiveness love one another seasonal affective disorder suicide