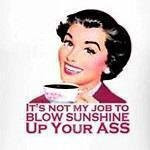 There are so many misconceptions about people when you refuse to let yourself get to know them. Just because someone has a "mean look" all the time doesn't necessarily mean that they're angry 24/7. It could very well be that they just have a dry sense of humor, and may even be one of the funniest people you'll ever meet. I know quite a few people like that. I'm finding so many people (more than I realized) judging people so harshly, just based upon appearances. I rarely see other's appearances, I'd rather "see" their inner appearance. One of my girlfriends were talking about this high school classmate we used to know years ago. She was one of the popular girls - a cheerleader - perfect hair - perfect everything. She was also one of the nicest girls in school. While at a BBQ we were both at, my girlfriend said, "That's her! Go say hi." She was sitting down in a steel fold out chair. She was sitting by herself. She couldn't move all that much because she was extremely overweight - to the point where she could get up very easily to greet me hello. I said hello and asked how she was. She looked at me as if I bothered her in between burger bites and said, "Do I know you?" Sneered at me, in fact. She knew me. I let out a "Oh.."  - And then I said, "Yeah, Deb from high school - we knew 'so & so', etc" ---- as I went on, she gave me a look like, "Shut it bitch, read between the lines." I got the hint so before moving on I said, "Ok, well wrong person perhaps, sorry to have bothered you." She sat there staring at me while gnawing on her last bite. I have a little note she had written to me on my yearbook. "So glad we became friends! Can't wait this summer to hang out!" What happened to the beautiful girl I knew - (not meaning physically) - the beautiful soul that used to greet me all the time with open arms?

So back to my girlfriend bringing this story up the other night - another friend chimed in and said, "Well, that's unfortunate. If she's going to be morbidly obese and mean, there's no point. Either you're fat and have a sense of humor and you're nice, or you're just fat and ugly. What's the point?" She went into how most 'unsightly' people are usually very funny or extremely nice to make up for the lack in looks. But I wonder, what would happen if physically beautiful people were mean and grumpy all the time?  Isn't it true that beauty's from within?  I have seen many "ugly" beautiful people out there. And although outer beauty can sometimes help a sista out, I can definitely detect a genuine sense of someone's personality. On the flip side, I know a couple of people who had a weight problem who were absolutely hysterical and so well liked because they were incredibly nice. Once they had gotten weight loss surgery, they became physically attractive, but also uptight, mean, aloof and very self-centered -- not the people I used to know. In fact, they're so overwhelmingly conceited that I just avoid them now. On top of that, they mock people who are overweight. It's actually very interesting to witness, but disheartening to know how much some people can change due to mere appearances. I don't get it and yet I do... People who were once overweight who now mock others for being heavy is like a former person who grew up in poverty, now rich, making fun of a poor person. Remember where you came from. 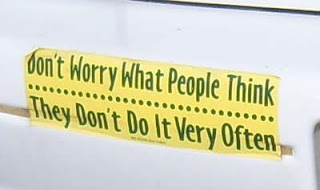 Compassion. It's hard to find. There are so many people who don't think before they speak. A couple of weeks ago, on Facebook no less, someone had posted a nice photo of herself. One of her friends that she works with said, "What a great photo! We have such a great dental plan, I don't know why you don't use it." I was. absolutely. shocked. Her teeth aren't even that bad, she just had a small space (gap) --- but it makes her who she is. It's actually one of her unique traits that make her attractive in my opinion. Why would you point out another person's "flaw"? My theory is -- when someone is so insecure about themselves for whatever reason it is, most likely they want the other person to feel bad about whatever it is that 'may' bother them. It's like misery loves company type of deal. It's funny, because the girl with the "flaw" has a gorgeous husband for over ten years, two great kids and an amazing job. The girl who pointed out her flaw is a 50 year old single woman...and one huge fault finder. Remember, people can say a million different mean and disrespectful things to you, but it's up to you to not react to it, but respond appropriately. Always keep in mind where it's coming from. They're unhappy people. You can't be fully happy and hurt others at the same time. It's just impossible.

For more of Deb's articles, please visit: www.debrapasquella.com or join her on Facebook and Twitter. Check out her cooking blog for some of her famous recipes!
beautiful people fault finder hurting others hurting people insults love one another mean people mean people suck physical attractiveness ugly people