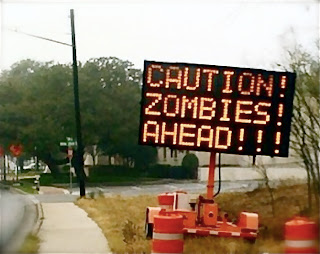 Last night as I'm scrolling down my Twitter feed, I saw a bizarre news headline that read, "Florida Man Shot by Police After Eating Another Man's Face".  I had to click on it to see if it was a spoof, but as I kept reading it, sadly, it was true. Witnesses say this naked man was chewing off the face of another man. They went to get the Miami police. The officer warned him to get off the man, but instead, this insane zombie kept chewing the flesh off from his face, looked up at the policeman and growled. That's when the police finally shot the man dead. Larry Vega was the first to witness this bloody attack while riding his bicycle into downtown Miami. He said, "The guy was, like, tearing him to pieces with his mouth, so I told him to get off. The guy just kept eating the other guy away, like, ripping his skin." He then said, "It was just a blob of blood, you couldn't really see, it was just blood all over the place."

Police assume it was drug-related and I'm sure they're doing some investigation. But has there been any incident such as this where the attacker has gone this insane, to bite off another person's face while on drugs? I remember once talking to this real 'out there' conspiracy theorist who said that terrorists have made this experimental drug where it turns people into zombie - which is why we're more likely to have a "zombie apocalypse". Even the CDC has warnings against a zombie apocalypse to my surprise. It sounds like a huge sci-fi movie, but this type of drug can literally burn the insides of your body and make you go after your fellow human being. While I think it's all 'psyche the public out hype' --- I also believe that anyone can make a drug that'll do anything these days. But my theory is: he was a cannibalistic psychopath -- drugs or no drugs. I'm sorry, but if you're that whacked out on drugs, the last thing you want to do is enjoy your high by noshing on the face of another man.


Click here if you cannot view the video above. Here's the surveillance video alone. It does a close up - but nothing graphic.


Click here if you cannot view the video above.