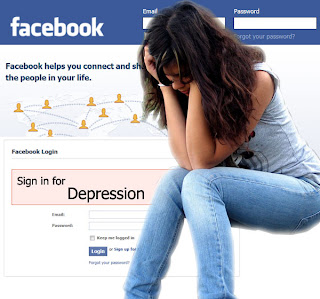 Remember back in the 90's, all you had to do was either call or email a friend to check up on their "status" to see how they were doing, and generally, you'd get a pretty honest answer? ...Not so much anymore. These days, it's not that simple since we have social media websites that let us tell the world 'how we're doing' or 'what we're doing'. There's no need for an email or phone call anymore. Just log onto Facebook or Twitter and check to see if that person's still breathing. I remember a few months back, a friend of mine came over for dinner. She looked depressed and not her ol' chipper self. I asked what was wrong and she said, "Everything." Her life had come to a place she had never expected. I was baffled, because on her Facebook account, she always had a "smile" - not in photos per se, but in her general status updates. They were all filled with happiness, a life well lived and even at times, a little bragging here and there. "I thought things were going great for you," I said as we sipped our goblets full of truth serum. "I wish they were, but 'he' reads every status message so I have to pretend I'm happy." Her ex boyfriend was still on her account reading every single word she wrote. She wanted him to stay on the account, stay as "friends", in case he decided to take her back. She put on a whole facade of how she wanted to appear to him: strong, brave, fun, outgoing and meeting new people and making new friends. In fact, it was the total opposite of everything she was doing. She was home, alone most of the time, drinking a lot and crying. She didn't want to be that person so she created one...just for him.  She mentioned how many 'party' photos he had up on his wall and how many people were commenting on all of his posts - a woman in particular. She said she would post encrypted-like messages to him that only those two would know.

How much truth is really on Facebook? How much hidden agendas have to creep into that network in order to hurt so many lurkers trying to hold onto that very person, which isn't the very person they had in mind? So as bad as it is for teenagers, this whole social networking is even worse for adults who are going through relationship problems. The one thing they all have in common is that they are fabricating their lives to be something entirely different, in order to either impress or piss off someone of interest. For me, Facebook is a tool to communicate and see people's updates, but most of all, to keep connected to friends and network with other people in similar lines of work. I suppose if I was divorced, maybe things would be different. Back in the days of Myspace - I was going through a breakup and remembering avoiding it like the plague. Your pages were public and 'out there' --- nobody had their accounts on private. You had one status message with a 'mood'.  I would put "ecstatic" or "happy" with a smiley face on the side when I really was sad and crying most of the time. So I know. But I am so thankful that I'm not going through such a turbulent time in my relationship, or maybe I would be doing the same thing on Facebook as I did on that small portion of Myspace. You never know what measures you'll take just to persuade others that you're "okay". How far is too far? And how much are we relying on Facebook to see how a friend, a family member or an estranged lover is doing?