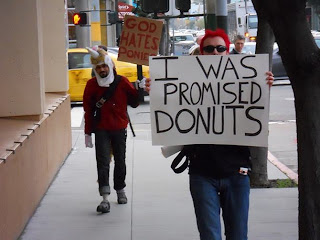 It's not that I'm not aware, it's only because life is too short to be worrying about "wealthy" people or those who don't do enough for society. I read about it, watch it on the news, see it on Facebook threads and think, why are we all so caught up in what other people are doing? But there are people who point out a very logic and valid point: it affects us in some way. But my question is: can we control it? There is absolutely nothing we can do. Look at Occupy Wall Street - they have camped out, protested, made scenes and even sadly, have closed down mom and pop stores do to the chaos. Not only have they tried to make their point, they closed down small businesses to which they were for. It backfired. This is how I see it... We live in a society full of greedy people and those who hate the greedy people. But, there are so many people complaining about "wealthy" people - those who have earned it. This country was built on enterprise and if we take that away, we'll be inching closer to socialism, and perhaps communism. I had a semi religions and political debate with a friend where he was claiming all wealthy people were evil. When I took my stance upon it, he said, "Well then, you must be rich."  Far from it. And that's when I actually can say something - because I'm not rich - I disagree with everyone counting everybody else's money. Get your nose out of other people's business and live your lives the best you can because in the end ---does it really matter?  And after all the pointless protesting, where has it gotten you? And no, I don't agree with greedy politicians spending tax payer's dollars on luxury boats, fancy cars and 5 star hotels, but I also believe that all secrets are eventually revealed. You can't hide out like that for very long. 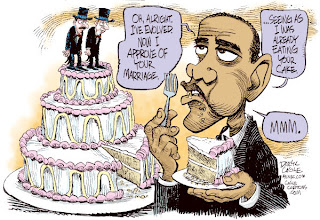 Have you ever noticed those political chatters on Facebook posting one blabber after another who really don't contribute anything other than spewing their hatred for the 'greedy republicans'? I get their point and many of it, I agree with, but if you're that passionate about it - go out and do something about it (if one can). Most folks on Facebook like to yank other people's political chains around for attention, but when someone is that passionate about a certain political matter - start a group - let people join in and 'try' to do something. But in my opinion, it's totally out of our hands unless someone in office can actually stand on their own two feet and make decisions on their own, even if against their will, like Barack Obama.  He quoted this back in 2008, “I believe that marriage is the union between a man and a woman. Now, for me as a Christian — for me — for me as a Christian, it is also a sacred union. God’s in the mix.” - April 17, 2008, while running for president, defining marriage at the Saddleback Presidential Forum. Did he have a change of heart, or did he simply start to understand more about what love between two people really is? Or was he persuaded? Was it for the upcoming election? So while there is still a glimmer of hope for some things in politics, My money is on political driven agendas. I don't believe that "we" as a country, as civilians, matter all that much. I also honestly believe that our votes don't mean shit. It's the electoral votes that matter. So where do "we" stand? We stand on the sidelines watching "them" run our lives. All we can do is enjoy 'now' and what we have, for whatever time God lets us have it. Or is that "too religious" for you?