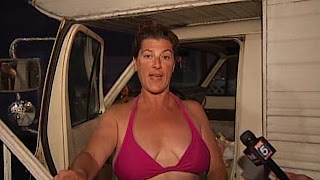 I just love people. I love their quirkiness, their unique ways of doing things and the ability to not give a flying rat's ass about what other people think. Catherine Scalia aka, "Long Island's hotdog hooker" has to be the funniest woman ever.  She says that she's a stripper, not a prostitute. She's out of jail and back on her wheels selling wieners again. As I'm watching the news, she was on there telling the reporters, "Dese' are real yanno", pointing at her breasts. "Strippers in Florida ask me if dese' are real too - dare' awl' mine! So come visit me, I'll be in front of Pep Boys today selling wieners. Sabretts & strips! Das, what I'm doing. Das' muy bawl game!" she says, laughing into the camera. It was hysterical when she was walking out of jail flashing the camera crew. I remember a friend of mine who had moved to Texas years ago used to have this same 'throw caution to the wine & see what happens' kind of attitude. She was actually much like Catherine Scalia. I had the best time with her. You never knew what to expect. One morning while driving back from staying at another friend's house in south Jersey in her Jeep Wrangler, she decided to do something that would totally embarrass me. We had the top down and were cruising down the thruway with a bunch of tractor trailers. We were with another girl who was driving, my friend was in the front seat, and I was in the back. While not paying attention, I realized that we were surrounded by a ton of tractor trailers. They wouldn't pass us as we were driving in the middle lane. Then I heard all the loud horns honking and honking. I look around and there she was - in the front seat with her top off. She raised her arms and said, "We're in New York baby! It's legal now!" This was when New York decided to let women go topless legally. I took the canvas convertible top and stretched it over myself to hide. But underneath, I was laughing hysterically. 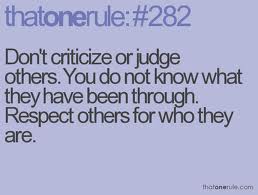 All my life, I usually hung around people who were daring, funny, quirky and those who had a colorful life and background. To me, everyone else seemed so rigid and judgmental of others. Many people judged my friend and mocked her for being 'her'. But to me, her ability to be free; to be herself without blinking twice at the people sneering at them was a beautiful thing. She loved her body, as imperfect as it was (to other people), and loved life. I didn't care what she did, as long as she was taking care of herself health-wise. I didn't want to clip her wings or tell her to 'act civilized' because then, she would just be like everybody else. In fact, I wouldn't change one thing about her. She got into crazy situations from time to time, but deep down, this woman was a good person. She would do anything for anyone and she had the biggest heart I've ever seen. The way she was treated by 'the civilized' was just ugly and downright mean - for no reason, or so they said they 'had a reason', but it was usually a clouded answer. I always stood up for her because I knew what an incredible woman she was.  We lost touch years ago, but when I think of her, I smile. She really made my life much more colorful and taught me that it doesn't matter what other people think - be yourself and you'll find out who your real friends are. I'll never forget her. Just like Catherine Scalia, I wish I knew more of these types of people. They really make you second guess your own ability to be happy and satisfied with your life. Kudos, sell those dogs! And remember, even in the Bible it clearly states that the prostitutes & tax collectors are entering the kingdom of God. (Although we know Catherine isn't a "prostitute"...) You get my drift.