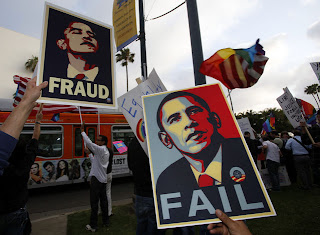 With only four words, I can finish this post by saying: all politicians are liars. --To add one more word to it: ALL. Before I get all excited, jumping up and down waving my big, loud rainbow flag into everybody's face, I also want to point out the obvious. How did Obama get elected in the first place? All minorities and those living in not so kept neighborhoods finally got off their couches, or punched out of their factory jobs to vote for someone who can actually relate to them. Let's face it - Obama's one of us. He's real. He's compassionate and seemingly, ~seemingly~ has a big heart. We didn't know how much ass he would kick during his term, but I'm sure he surprised many republicans, whether they want to admit it or not. And for the record, I didn't vote for Obama. I voted for McCain, however I was biting my lower lip watching Sarah Palin give Tina Fey loads of material for SNL. To be blunt here, that was desperation on McCain's part --- since Obama was running, (a black democratic male who had minorities + the LGBT community backing him up), and with Hillary Clinton hanging in there for a short while, McCain needed that extra boost: a woman as his vice president.  That is the only thing that made me question McCain's sanity. But back to why Obama got elected ---he appealed to most middle class Americans. And you know something, "middle class" is now considered making a six figure income, so even much lower income families we're speaking of. (That whole middle class definition still gets me.) 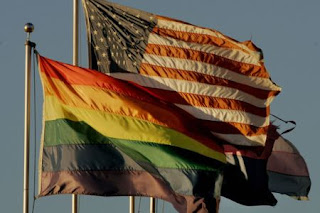 As much as Romney wants to gloat over the "so called fact" that Obama just ruined himself, the reality is --- he now has covered all his bases, because most of America either knows someone who is gay, has a friend who's gay, has a relative or immediate family who is gay and most of all, who IS gay. He is paving a smooth road, not to make the flamboyant Americans jump for joy, but to WIN this election, because that's what it's all about. And just because the president now sides with us, it doesn't mean that every single state is now going to bow down and let gays and lesbians marry - it simply means, "we have an accepting president now". Part of me thinks it's great and the other part smells a rat. A big fat lying political rat that's winning this 'race'. There's still a long road ahead for the LGBT community to still fight for their rights to marry, and that's okay because we've come so far. It wasn't even over 50 years ago when interracial couples were allowed to get married, and hey, that was also considered "a sin" -- yet that's now history, isn't it?  To what people interpret sin is and instill their religious beliefs upon political matters is basically taking the "freedom of religion" and throwing it out the window. That's what it boils down to. This is no longer a "Christian country" --- this is a melting pot full of different races and different religions and/or the lack thereof. If this is America, and we have those rights, then why is passing a law for gays and lesbians to get married such a burden on the right winged pubbies? Now you'll be hearing that "Obama's the devil", as it says in the Bible that we will have the 'evil one' become a leader. 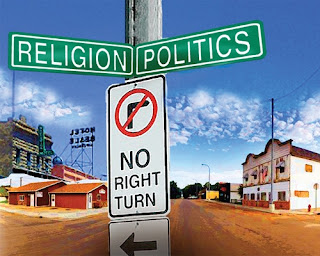 I just want to sidetrack for a moment and talk about "religion" itself. No religion is perfect and and most have different belief systems within one. With Christianity, there are so many different interpretations, misunderstandings and of course, the 'mold your mind' takes on scriptures which many of the times, Christians scare away people from coming to God. (That's the worst sin of all.)  For example, quite a few fellow Christians have told me that if I plan to keep being in my relationship (now marriage) with my wife, then I should stop calling myself a Christian because I'm "mocking God". They throw scriptures out from the Old Testament (Leviticus) and then try to incorporate the New Testament scriptures that speak mainly about the promiscuity of all men and women - not just for gays and lesbians. They can twist and turn these verses well enough to make anybody turn against God, or turn away from their own self and deny their own happiness; their true orientation of being gay or lesbian. So either way, it's a brainwashing type of mindset some of these "Christians" have. Do we really want that type of person in office?  Or do we want a "real" Christian in office that simulates what God has told us for years and years: we have a choice. That's what God gave us -- choice. Christian teaching also tells us that we should not judge one another, but love one another and love God with all your heart, which is the biggest commandment of all. So why should a "religion" or a belief in something that cannot be proved scientifically be apart of politics? Keep in mind, that my entire life, my entire being is all for Jesus. My faith in God is so strong that it does not matter what religion or spiritual practices my president is. All Republicans (and I'm not even going to say 'some'), will use religion to persuade weak-minded people. Just something to think about.

But I digress. This doesn't make Obama any better though. By him now accepting gays and lesbians marrying -- this just reeks of political gain. For me, it's all about pulling the race and orientation 'card' -- and for the Republicans, it's the 'religion card'. So in this case, is there really such a thing as in the lesser of the evils, or is it a matter of which liar we're going to vote for?  We are never....ever....going to get a truthful candidate in office. If you solely rely on politicians to make your life "easier" - or perhaps, "happier", then you're going through life under a facade that can really baffle you later down the road. Nobody can take away your right to love. Nobody can take away your faith in God. Nobody can make you see a better future but YOU. I had recently said to someone that I hate voting for the "lesser of the evils" and if it comes down to that, I won't be voting at all come election day.