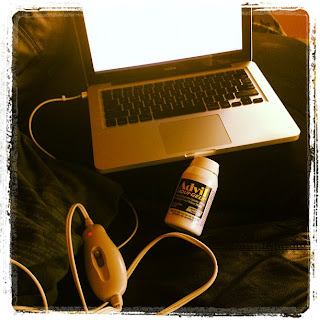 This is my work station for today: computer, heating pad & Advil. I'm having a bad day. I'm having a bad week actually. It's been getting worse and worse this year for whatever reason (or reasons I will deny till I'm blue in the face), but it's absolutely unbearable. I've always been able to tolerate the symptoms of PMS, (the week before menstruation - some people confuse the two), but this is just craziness. First it starts out with a tinge of lower back pain. I have to move more in order to feel human. But then, it defeats me and I'm bundled up in the corner of my bed popping Advils like it's candy. I can barely walk. I can't bend or I'll just topple over like a big ol' weeble wobble. My third day into it, the pain radiates down into my legs. Some say it's sciatica and others just don't know what to do with me. By that time, I've developed a pair of horns on my head and a forked tongue. It's these times when those around me need to tread gingerly. I actually pray for sanity and the safety of those around me. I'm a complete emotional and erratic roller coaster of terror. My doctor tells me that I have a major imbalance of hormones. During this time, my estrogen drops and my testosterone levels rises to an alarming rate, making me develop hair in ungodly places and having me rage like a lunatic without a straight jacket. About two minutes later, I could be seen in the TV room watching Lifetime and crying into a box of Kleenex. It's tricky. I tend to isolate myself from family and friends. I know what you're thinking: poor Madelene. I just received a text from a friend asking if I wanted to go out for happy hour. I warned her of what she was in for. She responded very bravely, "And this is different from any other day?" Ok, so I'm able to laugh at certain times.

There are more chances for me to take things the wrong way. If you wipe my counter, I'll ask you if you think my house is dirty. If you tell me you have no chocolate, I'll think you're implying that I've gained weight. It gets messy. There's no pill to fix it either. They either give you hormones to balance it out (which actually makes things worse for me) or Midol, that doesn't do a thing to me. After the week or two of PMS, I then go full-fledge into menstruation. At first, I'm completely relieved of that 'explosive' phase where I just want to rip the heads off every dandelion I see. This phase is a 'mentally stable one' (as stable as I can get) and a TON of excruciating pain. It can get so bad that I'm hunched over in pain either vomiting or passing out. I had to be taken out by an ambulance once due to the extreme nature of my cycle during work. I don't have any fibroid tumors or cystic ovaries -- my doctor tells me that I have an overactive uterus. Great. Give it a horse tranquilizer! I can't take this anymore. Then Madelene pipes in, "Well, if you get pregnant, you won't have your period for 9 months", as she smiles with anticipation. "No."  I truly want my uterus out of my system so I can live a normal life. Madelene had hers out when she was having problems and these days, she's doing great. No pain, no PMS, no anticipating a fiasco of random 'happenings' when she's out and about. I always have to worry when I go somewhere - either my back will go out, I'll get sudden excruciating pain or excessive bleeding. I don't want those worries when I'm living my life. In fact, if there was a ~simple~ way I could be a man --- I would.

Not only does this curse mess with a woman's reproductive system, but it messes up your entire bowel functions where it's almost comparable to having a stomach virus for about three days or so. I've developed numerous stomach ulcers since childhood because I've been taking 800 mg of Motrin during these times. I now have chronic gastritis and esophageal erosion due to no other option for pain relief. So I basically live off Prilosec and Zantac every. single. day. of my life. Nothing else works but ibuprofen so I'm screwed. I've been to a slew of doctors who just chuck me up as a mystery. I don't have PCOS or anything anyone can ever guess. I was diagnosed with PMDD, which is another word for bitch on wheels who doesn't feel so well. They even are willing to prescribe antidepressants for this. At this point, I'm not sure if I'm welcoming menopause or scared to pieces of it. I just want to live a normal FULL month. If you don't hear from me in a week, call the guys in the white coats.