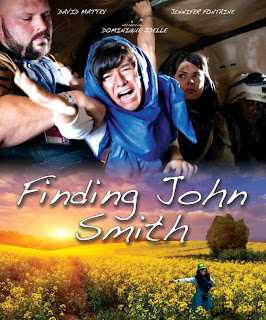 I've had the great pleasure and opportunity to be one of the first to screen and review, Finding John Smith written by Jennifer Fontaine, Marlo Bernier & Tim Anderson. It's one of the first indie movies that had my emotions teeter-tottering from laughter to tears. There are so many special parts to this film that it's hard to narrow down which scene I loved the best. The story is based upon a young girl named Aaseamah Khalid, (played by Dominique Joelle) who finds herself in the middle of a chaotic bombing in Iraq, where two journalists quickly snagged her up into their truck for safety by Jake and Jody, (which are played by David Mattey and the beautiful Jennifer Fontaine).  Thinking they had left the young girl behind with Iraqi officials, they quickly learned after their flight back in a midwest airport bathroom that Aaseamah had snuck her way into the U.S. to get help in finding her father --- John Smith.  This is where the movie gets quirky and gives off a slight humor to the story line. 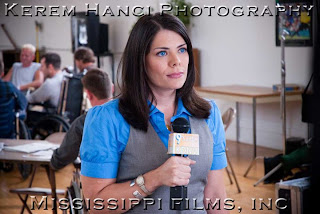 Jody McKenton (Jennifer Fontaine) plays a steadfast and strong-minded journalist who brings her cameraman, Jake everywhere she goes. They embark on a mission to find Aaseamah's father. All three of them head off into their news van straight into the middle of Iowa.  At first Jody seems cold in the beginning of the film - rigid and a tad aggressive, until you start to fall in love with her softness and developing vulnerability later on in the film. She becomes very likable at that point for me. She is constantly being stalked by a co-worker as she does this particular story because Missy Martinez, (played by Lydia Blanco) who is a small time news anchor is ready and willing to fill Jody's shoes and extremely jealous of  her success. 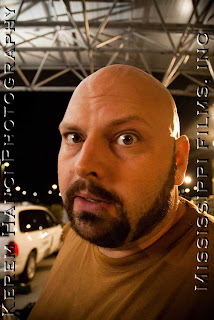 I especially loved the character Jake, (played by David Mattey). He's very likable in this movie. This gigantic, almost 7 ft tall bearded man with enormous tribal tattoos all over his arms is one. huge. teddy bear. It's evident he has a special place in his heart for Jody and you can literally feel the sparks fly as they both interact with one another. One of my favorite scenes is of Jake teaching Aaseamah how to say "pizza" and "coke" as they're face-to-face for the first time eating lunch in the break room of the news studio. He takes the time out to teach her new words and she quickly sees the softy that he is and adores him like her own father. They develop this unique father/daughter bond throughout the film. His easy and humorous demeanor, while wearing his heart on his sleeve gives this film an emotional twist or two. I'm always a sucker for a big and seemingly tough guy who is really as gentle as a lamb.Any film that can put me into ten moods in less than 90 minutes is definitely a must see. The brilliance of this movie is all in the details. Every scene, every response, facial expression and unsaid communication is what I truly admired. It shows you everything from the oppression of the Iraqi civilians, learning about the Gulf War Syndrome and overall, how love and family can quickly develop even if there is a language barrier.  Very moving! I'm looking forward for everyone to see Finding John Smith when it's finally released. This crew not only worked their tail ends off on this film, but they actually had the ability to put so much heart into it.

Click here to be updated and informed of its release on October 16, 2012. "Like" them and check out some of their photos, trailers and other neat things on their Facebook page.

Check out their trailer below...
If you cannot view the video, please click here.

For more of Deb's articles, please visit: www.debrapasquella.com or join her on Facebook and Twitter. Check out her cooking blog for some of her famous recipes!
at May 16, 2012