For years I have spent hours and hours on the couch of some psychotherapist trying to defend my childhood or why I “chose” to be a lesbian. “You may very well be regressing some prior sexual abuse as a little girl, which is why you are gay.” And the worst part of that sentence is that it was from another gay therapist. She went on, “We choose this lifestyle and for good reason.” I looked at her confused and asked, “Then do people choose to be straight because they weren’t abused? Because if so, I know plenty of abused heterosexuals out there. Explain that to me please?” She couldn’t. I stumped the psychoanalyzing chump. Years later she had lost over 100 lbs worth of PTSD in weight by squeezing her stomach with a lap band and a ton of therapy to go with her eating disorder. Of course I had to change therapists and I started seeing another interesting character who had claims of seeing UFOs. It was then I stopped therapy with females altogether and just relied on my favorite logical ‘down to earth as he sees it’ guy. Female therapists were always quick to blame “mommy” or that I had “daddy issues” of some sort. I never understood that. I never even brought them up in therapy most of the time, so why even head there? But, psychology teaches this bullshit to the extent of placing all these problems or ‘issues’ upon the wrong person who doesn’t happen to fall into one of these categories. 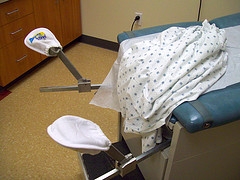 Many of my female friends and family all ask, “Why do you see a male gynecologist?” I will never again let a woman examine me --ever. I had so many bad experiences with women that I have to wonder about their compassion in that line of work, or if they even have a vagina to even comprehend any sort of understanding of the female anatomy. I will admit, I didn’t see a gynecologist until I was 20 years old. I was already dating Madelene during that time. The doctor put me in the stirrups after asking if I was sexually active. She also asked there was a way I could be pregnant. I assured her I wasn’t. When she placed the speculum inside and I screamed bloody murder. She looked at me and said, “Just ease up and relax,” and then tried again to only have me screaming. She got so angry and impatient with me that she yelled out, “This is smaller than a penis!!!" She was laughing afterwards, almost mocking me. I immediately snapped back with, “Well thank God I don’t put penises up there -- I’m a lesbian! Now get me out of this fucking chair! You have no clue how to handle women gently.” I ripped off my paper gown and stumbled across the floor to get my pants back on. “This shouldn’t hurt,” she said, almost -- almost trying to apologize, but she didn’t. No compassion whatsoever. And even if there was a problem, if I HAD been abused and mentally ‘closed up’ for business --- MORE compassion please! What’s wrong with these idiots? I then found myself relying on men who treated me much gentler and with much more compassion. And that’s why I only trust male doctors and therapists. Sounds odd coming from a woman, especially a lesbian, huh?

Strangely enough, I still remained ‘me’ - remained gay. It wasn’t a “choice” or a symptom of being abused. Sadly, many people in professions such as psychotherapy and in the medical field start to get that thousand yard stare. I don’t speak for all, but it’s so true. When I stayed overnight in the hospital last winter, all the male technicians and phlebotomists were all gentle and so kind. The women? They all either gave me a hematoma from jabbing me so hard with the IVs and needles or they were just rude and abrupt with me. I even once said, “I would prefer a male nurse please.” I do this a lot when I’m stuck in some medical situation. I can’t be the only one who feels this way. I actually feel bad admitting to this, but why are so many women so brutal with their patients. I realize there may be men out there in the field that are the same way, but I haven’t found ONE that was rude or made me feel bad about being there or “wasting their time”. This is probably another reason why I would never vote for a female president, no matter how much I agree on the issues they stand for. I hope one day some woman in the medical field proves me wrong. That would be a breath of fresh air.