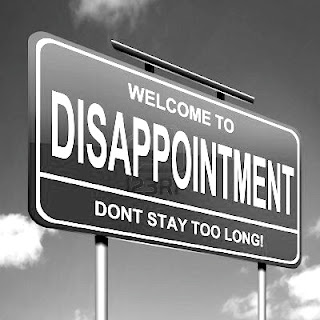 If there is one thing I have learned in all of my, umm, 29 years is this: never expect anything from anyone. I don't mean to think less of someone else's abilities to do something for you, but never expect what may seem "appropriate" or what someone "should do" ---- they're not you. They can't read minds and if you don't tell them what you need, they may never know. "Well, he/she should know." --Not acceptable. People have these high expectations for others, which sometimes can be seen as unreachable or unobtainable, and it's not fair because that one person being mentally battered hasn't got a clue of what's brewing. For instance, and this one is not a huge deal, but my dad had a long time friend for years who had stopped calling once he passed away. Mom piped in, "Well he should have called by now."  But if you look at it in a different view, maybe he's taking it much harder than we realize. Granted, yes, he "should" call, but people are different. Even though "he should" --- we can't expect him to pick up the phone and chitchat, when in fact, there wasn't much chitchatting going on with him and my mom in the first place - it was my dad's buddy. But yes, out of respect, maybe it would have been nice. 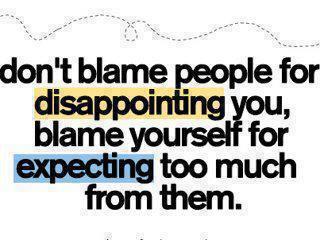 No matter how much you do for others, never expect the same in return. If you're only giving in hopes that everyone else will return the favor -- is it really "giving"?  "Well I did this for you, so you should do this for me." That type of mindset will leave you bitter and resentful toward anyone that crosses your path. At times, when people help out so generously, there are people out there that may think that you don't need a thing in the world. It sounds twisted, but it does make sense if you think about it. When you let someone borrow money, act as though it's a gift and that you will never see that money ever again. The more expectations you put upon a person, the more disappointments you will always receive. It's a law. No doubt - there are good people out there, and it's awesome to give people the benefit of the doubt, but it's also a bit more realistic to see things as they are once you're left empty handed without an offer of help or even a simple, "How are you?"  Every man for himself so to speak, and if help is offered ---then great! Communication is key. Never assume someone knows what you're going through. If you're unable to talk to someone about what you need or what you may be going through, always keep in mind the other person may see your world as "bright and shiny".