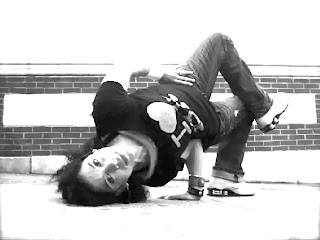 I pulled up to the grocery store to find that there wasn't one single parking spot available. Everyone was rushing around getting Thanksgiving food already. It was packed. I finally found a spot in the way way back of the lot, where they divided the parking lot with cement and brick wall. I didn't mind. After all, a little exercise wouldn't kill me. As I got out of my car, I noticed that I startled some young girl who was standing on top of the wall, overlooking the street below with her headphones on. I immediately waved and said, "I'm sorry I startled you!" She nodded and said, "No dude - you're cool...you're cool." So I continued to walk up to the store chuckling at her response. I remember being her age and all my friends making fun of my 'proper English". I always asked them, "Doesn't it get tiresome starting out every sentence with, 'dude'?" All the time, I heard, "Dude, let's go downtown to grab some smokes." "Dude, there's a party at Jen's house later on." "Dude, wait up!" "Dude, whaddya' doing tonight?" Dude! Dude! Dude! Or even --- just "Dude!" when someone does something really messed up. The word "cool" has always been a neutral, yet rare word that would fly out of my mouth. But I remember the language all too well.

When I finished shopping, I rode my cart full of groceries down the hill toward where my car was parked. The young girl was still standing on the wall. Before I could even open my trunk, I heard, "Dude, wanna see me dance?" I looked at her and I'll admit, I examined her like a bug under a microscope. I can immediately see something wasn't 'right'. Her baggy sweatpants had a huge hole near her calf and her sweater was large enough to be worn on a 300 lb man. She took her hoodie off and unleashed her thick brown straight hair. Her face looked like Angelina Jolie, with the roughness and attire of Ally Sheedy when she was in Breakfast Club and High Art. I had no other choice than to say, "Sure." She then started to breakdance right on the macadam, trying to swirl her feet around her body, sometimes stopping midway because she would get stuck. I felt like I was in an insane asylum courtyard momentarily, hoping that this would be a brief encounter, but it wasn't. This dance lasted an entire and uncomfortable 3 minutes. I tried to end it by saying, "Wow, that's great!" But she said, "Dude, watch this..." and then continued to try to maneuver the wave, (to which I can do perfectly by the by). Yes, I did this back in the day. I put my bags back down into the cart and did the wave for her. She said, "Dude! That's totally awesome!" So here I am, in Shoprite's parking lot...breakdancing with a 16 year old.

"You look familiar, do I know you?" she asked, hoping we'd have some 'people' in common. I was shocked by her question, because clearly I'm much older than she is. "I may know your parents," as I chuckled thinking, oh GAWD I'm so fricken old. She then got her iPhone out to show me all of her guitars. I immediately got my iPhone out as well to show her mine. We... (this is hard for me to say) ... we...had too much in common and started talking about music and even breakdancing. I told her that years ago that was the shit and that everyone would go down to the roller rink to breakdance in the smaller rink. There were competitions every Friday night. I told her she should go down to NYC to show her stuff off (even though her stuff was a bit rough). She said that breakdancing was making an emergence (not in those words of course) and that she was trying her best to get into one of these competitions. We then headed into 'car talk' because she wanted the same one as mine. It didn't end there because right after that, she asked if she could sit in it. I let her and then told her I had to head back home to feed the kids. (I know, I know...) She said, "Dude, you have kids? You're like what -- 20 years old?"

For more of Deb's articles, please visit: www.debrapasquella.com or join her on Facebook and Twitter.
at November 15, 2012