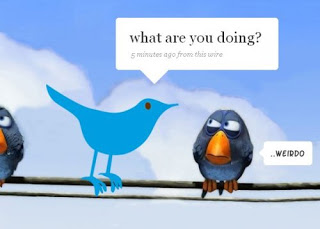 Remember the days of Myspace, where people could just leave random crap on your account without the ability to comment back? You would have to trek over to their account in order to respond to anything. It was tedious and well, self-indulgent in regards about your page being all about you, photos of you, tons of glitter, what you like, what you do, live, work, etc. Facebook is like that but much broader. Anyone can comment on anything you post, depending on your settings. It's more private, where as Myspace was usually kept open by many people. I admit, Facebook has become a major part of my communication with friends and family, but it doesn't help me search for things of interest like Twitter does. Twitter is fascinating, if you really learn about how to use it. At first, I was like, "Why would I just want to leave a bunch of status messages?" It's more than just telling the world you had the best seafood taco - it's about hashtagging topics of your choice and getting firsthand information from everyday people to big time media sites. You can jump right into a conversation by hashtagging your topic. So if I was watching American Idol, I would just write my opinion on who I liked or who I didn't like and at the end, type #AI or #AmericanIdol (without separating the words). It's a great way to share photos and information about what interests you, but it's also a unique way to communicate with the entire world. Twitter is useless in my opinion if you make your account set to private. No one can see your comments if you hashtag -- and that's the fun part about it. The downside of hashtagging is developing a fake following, like spambots with eggheads (no photos). I'm not sure what the reasoning is behind it, but it's annoying. 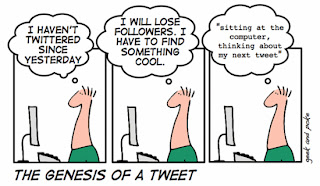 Connect. I see many of my friends hopping onto Twitter and then asking me, "How do you get followers?" Connect with people. Pick a hashtag (#) of interest. So you like gardening, then hashtag #gardening into the search engine and jump into a conversation, perhaps even review a particular account and follow them. You have to follow in order to gain in most cases. Friends of friends is always a fun way to meet others on Twitter. They usually have similar info. A forewarning: everybody's a comedian on Twitter. Some of it is funny, while others try way too hard. Don't feel you need to be funny in order to tweet. It's better to say nothing at all if you don't have anything to tweet about. But keep it current because people will unfollow inactive accounts. I see some of my friends with only 5 followers, who ask me, "What's wrong with how I tweet?" I look at their accounts and they are trying to communicate with celebrities or organizations of interest. While it can be fun to get a response from a celebrity, interacting with everyday people is much more fun and rewarding. I have gotten some great recipes on Twitter. I also get firsthand news, before it's even plopped on the mainstream media on TV. I even connected with someone when my dad passed who sent me a beautiful oak tree for his memorial. The people on Twitter (in my opinion) seem much more updated on current events, and seem a bit more tech savvy. If you're a blogger, remember to always link your Twitter account so people can follow you, as I do at the end of every post. As soon as I started doing that, I gained a ton of people hopping onto my account. (They must be crazy.)

I know this isn't one of my normal posts, but a few of my friends have just joined Twitter, so I am writing some tips which have helped me gain a following. I usually Tweet from my iPhone and there is always a website that enables you to automatically tweet their article or video right from their page. It's very easy and if I may say so, much better than Facebook. Just keep in mind that when you tweet anything -- it goes on the web forever. Anything you decide to post, whether it be  blogging or tweeting, make sure you want the world to know before regretting a post or two. If you don't have a Twitter account, try it out and don't forget to FOLLOW ME!!! Ok. That's all. Tweet your hearts out folks.