Up Before the Rooster Crows 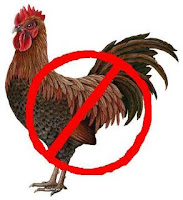 For a while, I’ve been having insomnia. It’s not so much that I can’t sleep; it’s staying asleep, which is also considered insomnia. I go through spurts of it though; it’s not all the time. What wakes me up while trying to fall asleep is I have problems coordinating two things: sleeping and breathing. I wasn’t much of a multitask kinda' gal anyway, but for the love of God, why can’t my body cope with two natural involuntary things to work with? Right when I’m surpassing the first REM stage, I wake up gasping for air. Sometimes, I even feel as though the air won’t even enter my lungs. For 3 whole seconds, I really believe that I’m going to die right there. So what happens? I stay awake afraid to fall back asleep again. Of course, this always has a ripple effect, leaving Madelene sleepless as well.
For the hour that I did manage to sleep last night, I had the scariest dream. I dreamt that I was at an ex-girlfriend’s apartment. Inside, she had a male ghost. (Don’t ask. You know how dreams are.) Anyway, my ex-girlfriend was out and I was left alone picking up my guitar that I had left there. While I was closing the case of the guitar, the ghost snuck up from behind me and tied me up with a phone wire and left me there lying on the floor. Seconds later, I heard the hissing sounds of the gas stove and the doors and windows shutting. He was trying to kill me. Somehow, I managed a way to untangle the phone cords and drunkenly staggered (from the gas and not vodka of course) to the stove to shut it off. I remember how dizzy and fatigued I felt. I ran outside to get the hell outa’ there. I survived, but when I woke up from the dream, I couldn’t go back to sleep.

One website told me to listen to the subconscious messages that my dreams are telling me. They basically said that dreams hold powers of psychic and analytical data into your inner thoughts and subconscious state-of-mind.

This article by Janet Kinosian stated: “A doctor once told me to address my subconscious kindly a moment before I fell asleep: ‘My dear sweet subconscious mind (that took a while to say with sincerity), be assured I will hear what you have to tell me tonight. I can listen best if you don't shout or scare me.’ And yes, this accepting attitude has worked well for me, and still does. Once again: Dreams are only messengers. You can choose to listen or not. It's up to you.”

Don’t get me wrong, but if I said this before going to sleep, Madelene would have the guys in the white coats after me. I just can’t imagine saying that. I don’t even know if I believe that our dreams are subconscious messages. I remember my cousin once bought me a book so I can interpret my dreams. I was amazed to read what certain things meant if they were in your dreams. For example, if you dreamt of a carrot – you would receive money soon. I mean, come on – it was like some funky version of a Chinese fortune cookie message. So instead, I went out and bought a similar book to compare it with. Turns out, if you dream about a carrot, it means that your health would soon deteriorate. Quite a different interpretation, huh?