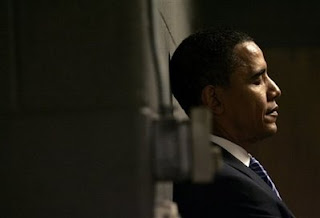 While in the presence of a friend who is way too political for my taste, he brought up something I really never thought about: assassination. He explained his views on Obama getting elected for presidency. He was concerned that if he did win the final election, that Obama would most likely get killed during his term. My question is, if Bush made it through two terms alive, wouldn’t Obama have a better chance? My friend explained that Bush has the white supremacy, the radical Christians and basically, “rednecks” on his side. That’s what basically got him in. People like the most of us, who feel that Bush wasn’t such a good president wouldn’t think of assassinating him, but instead, voting for a new president in the next election.

You can’t even make those statements though, because look what happened to President Reagan. A white Republican who a lot of people liked. I’ve heard these statements a few times from other people. I wonder if people secretly wish death upon our presidents that weren’t of their choice, or if it’s just a mere innocent concern.

I rarely talk about politics, but it really bothered me that my friend brought this up as though he knew for sure this would happen if Obama got elected.

Here are some of the comments from my blog on Myspace:

Michelle
I truely belive that Presidents ALWAYS have a secret Assasin. Look at former President JFK. He was supposedly the most loved President the US has ever had and even he was murdered. It's an unfortunate fact that everyone has someone that doesn't like them and if your "famous" or "important" that only puts a much larger target on your head. It's a situation that knows no creed, Race, or Gender....Unfortunatly.

Red
I've actually wondered about this but not enough to bring it up in conversation. You have to remember that people who have been assassinated were either set up or the person who shot them was not mentally stable. I don't think it's something that we really need to worry about. Whoever becomes president will have many people guarding them and I'm sure security has been advanced since the several shootings of important people in the 60's. (If you notice, whenever the President goes anywhere the top of his car is CLOSED; R.I.P. JFK) I'm a supporter of Obama but I'm not sure that he'll win the Presidency. I would tell your friend to wait till Obama is elected into office, if he/she is still worried they should write a letter and send it to the White House.

Rocker Mom
I have said this too...there are way too many racist out there then I care to think about.Honeslty, I dont think there is anyway he is going to win, there are too many people out there that would rather have another repulican in office then a black manwhich is sad really...

Queen of Everything
You can't be in the public eye - let alone in public power - without drawing out the psychos. However, I have to agree with your friend. Because of his family background, being a relative newcomer on the powerful elite, and sadly, because of his race - I expect that the threats to Obama will be exponential when compaired to his successors. I wouldn't be surprised if someone didn't attempt before the election.But I also think he has slim chances of winning. I think he's been set up as a canditate sure to lose.

corkey
I believe your friend has a valid concern. I saw on Fox News, the leader of the KKK in South Carolina, say, "If he comes here, he will be killed".I had thought for a long time, that whether him or Hillary got elected; they would be assinated in the first year, and the VP would move into place. I feel it as if it has already happened.While a large portion of America is ready for a change, those you mentioned above, will not put up with either a woman nor ANY race man - other than white. It is sad to say, but we are still too BACKWARD or back woods to think this will work.In addition: If Obama is elected and subsequently assinated, there WILL be RIOTS! Rodney King in the 90's was just a drop in the bucket.I wish PEACE and Truth would ring out, but... this is America - Patriarchial, Judgemental, Selfish, Unforgiving, and Proud to be so...

Tom
Who is this Obama you are talking about? Does he play for the Lakers?

AVID ROSS knows me by Name!- OMG I'm special!
All I can say is if you were black you'd understand and you would of thought about this. I'm surprised his still with us at this point. There are so many people that HATE blacks still I mean you'd be soooooo surprised!!! It sucks cuz its almost like you have to be black to really feel the kind of fear we feel. I have alot of friends who voted for Hilary because they didn't want Obama getting killed. With the history of my people....some of us experiencing first hand deaths in our own families by racists...its hard on us. We don't want another MLK death or MALCOLM X death.

He has a double target on his back like foreal. I'm trying to be positive too but the fact is its scary. And if he survives (which i pray he will) he will seriously be making history. Most blacks don't survive that kind of movement. Like my great uncle was shot dead in front of my mom when she was 9 years old........all of the kids all 10 of them were outside. A white man was arguing over land with him and my grandfather tried to tell uncle calvin to hush. But he was the type that refused to let a white man run him. In return he pulled out a gun and shot him dead right on the porch. To this day my mom fears going in closets to find bloody shoes. So to us (blacks) its really personal. We are so proud of Obama that we don't want to loose him! Already just by being nominated he has moved our people to greater beginnings. I'm totally scared! Being that the KKK is yet in full effect. My mom n her siblings were shipped out to cali one by one cuz they threatened to kill them all. They'd wake up to KKK in blood all over their house n the steps. But it was a white woman who had mercy on them n took the money out of her own pocket (allowance her hubby was giving her) and she'd give lil by lil to my grandma until all the kids were in los angeles with my great aunt.

I know sounds like a book huh? But yes we're worried and we all need to be praying. The regan comment? ummm he wasn't black.
ENUFF SAID!