Inevitably, you knew I’d be back like a bad case of acne during PMS. Although my short lived resignation to this blog was supposed to be permanent, I have way too many thoughts and questions that flow through my mind, to which I need answers and opinions to. I initially quit blogging for a short while due to stressful circumstances in my life that left my mind absolutely blank. I had nothing to give. I had no thoughts. My mind was shut down. During my break, I’ve been writing short articles for a local magazine (freelance) and at times, posting them in my own personal blog periodically on Myspace. I guess I’ll start this blog off once again with an article I had written a few weeks back.

Why are some people so quick to analyze everyone else’s relationships except for their own? Even if they’re single, they still have a strong opinion, which is even a worse case scenario. I think we all know what we “should” do or what a relationship “should” be like, however no relationship is perfect by any means. If you expect a passionate and 100% understanding relationship that is equal on both sides, then you’re in for a rude awakening. Hey, I’m not saying it’s not out there – I’m just saying that it’s hard to find and eventually that 'perfect steel beam' of perfection will eventually wear down from time-to-time. Is it fixable? In most cases, yes. That’s up to the person who has the house built with those steel beams. Will the owner fix it? 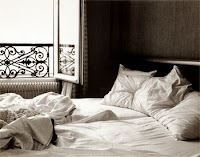 I recently came across an article in this month’s addition of Curve Magazine about LBD (Lesbian Bed Death). This upsets me a great deal because they focus on LESBIAN bed death. I mean, I know many heterosexuals that are chewing on ice and waking up with morning wood. Why are we just focused on the lesbian community not getting some in the bedroom? Can’t we safely say that all of us are at risk for BD (bed death), gay or straight? Baffles me. We’ve pigeonholed ourselves into this category of sexually deprived lesbian women.

Another gripe of mine would be “one” of my male friends (names will not be mentioned), who constantly hints about having a fling or throwing sexual innuendos at me. Is it flattering? Sure. The only thing I don’t get is when a man hits on a woman (lesbian) and who is already in a relationship. They don’t view it as “cheating”. Even “some” bi-sexual women don’t view having sex with another woman cheating. It’s sex with another person! Doesn’t that qualify for cheating? If you have an opened relationship like that, then fine. But call it as you see it: infidelity.

Sometimes I really believe that there are a lot of people who view homosexuality as being promiscuous, which would explain the holy rolling bible thumpin’ peeps who constantly tell us we’re going to hell for having sex with the same gender. Meanwhile, back in many ranches, there are tons and tons of heterosexual people having premarital sex.