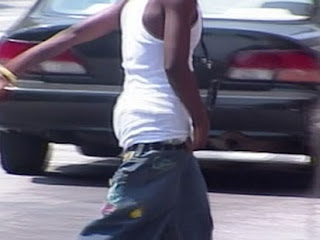 About ten years ago, I picked up Madelene's father, Tom from the hospital because he had gotten a procedure done to relieve his sinus congestion. We drove off to the pharmacy to pick up his pain meds and Mad went inside while we waited in the car. While we were sitting there waiting, a young black kid maybe in his late teens or early twenties was across the street just hanging around with his buddies. He wore a blue bandana tied around his head like Tupac, a sweatshirt with a hoodie and his jeans were sagging so low, that his entire ass was exposed in his boxer shorts. It looked ridiculous. His crotch was down to his knees. I was hesitant to say a word, being that it may come across as a racial remark, but I couldn't help it. I said, "You know, I'm not a racist --" and I was cut off by Tom immediately. "I know! I know what you're going to say! It's not being racist, it's the way these kids dress today whether they're black or white. They make themselves look like thugs, even if they're not thugs." We both agreed and were both relieved we were thinking the same thing. I said, "I would never be scared walking down the street seeing a black person --ever. Why would I? But if you dress like a 'gangsta', then yes, I would be a bit intimidated by that." There is a huge difference with profiling a black person vs. profiling a thug or a 'gangsta'. I've seen them come in all colors and sizes. So when people mutter our "race" with Trayvon Martin, I just think how many of those people would possibly judge Trayvon upon first appearance -- regardless of his race. His sagging jeans, his hoodie (yes it was raining I know), and what about how he acts? We've seen the photos of him puffing marijuana, giving the middle finger and well, perhaps being a "wannabe thug". Most are wannabes - they want to fit into their surroundings and appear tougher. I get it. School's a tough place to be, but I disagree with this whole tragedy being about race. 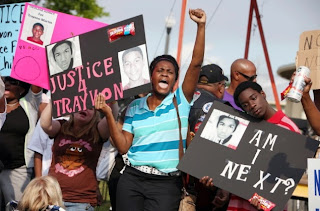 Here's the thing though: we don't know what happened that night. We don't even know if Zimmerman approached him with his gun pointed at Trayvon, or if it was pulled out after the fight. We don't know if Zimmerman's story is true or not. We don't know if Zimmerman really did defend his life out of fear. But by law, we cannot convict someone when we do not have sufficient evidence. But that's not my point right now. My point is, I'm so sick and tired of black people pulling out the race card and making this a racial thing. Everything's about race. "Oh he's black that's why he killed him." No. Maybe he looked like a wannabe gangsta with his pants hanging down to his feet. If you don't want to look suspicious, then stop dressing so suspicious. After the slew of robberies that occurred in their complex, it's no wonder Zimmerman "profiled" a thug. Gangstas and theives dress that way. I'm sorry, but if you have no respect for the public eye and you want to dress in a way that makes you look intimidating, then expect to be profiled. I have a hard time with the race card being pulled out. I even had a heated debate with a black woman about an entirely different topic, having her state that all the men in Provincetown who were workers were sexually harassing black women only due to their history. When I told them that we got the same response from the same people and that we were white, oh the claws came out and they lashed out with such vengeance saying things like, "white privilege" and that we didn't know how it is to be black, etc. You can read the story here. They were upset that they got "catcalled" on the streets and blamed it on their race.

My friend Marlo Bernier brought up something very important on her status message on Facebook:

"Emmett Louis Till (July 25, 1941 – August 28, 1955) was an African-American boy who was murdered in Mississippi at the age of 14 after reportedly flirting with a white woman. Till was from Chicago, Illinois, visiting his relatives in Money, Mississippi, in the Mississippi Delta region, when he spoke to 21-year-old Carolyn Bryant, the married proprietor of a small grocery store there. Several nights later, Bryant's husband Roy and his half-brother J. W. Milam arrived at Till's great-uncle's house where they took Till, transported him to a barn, beat him and gouged out one of his eyes, before shooting him through the head and disposing of his body in the Tallahatchie River, weighting it with a 70-pound (32 kg) cotton gin fan tied around his neck with barbed wire. His body was discovered and retrieved from the river three days later. ***

Medgar Wiley Evers (July 2, 1925 – June 12, 1963) was an African-American civil rights activist from Mississippi involved in efforts to overturn segregation at the University of Mississippi. After returning from overseas military service in World War II and completing his secondary education, he became active in the civil rights movement. He became a field secretary for the NAACP. Evers was assassinated by Byron De La Beckwith, a member of the White Citizens' Council. ***

(Benjamin Crump - Civil Rights Attorney, you are the one who should be ashamed by your comparing the above two men with Trayvon Martin - their cases all tragedies and all could have and should have never happened, but they are a million miles away from one another - and furthermore by your comparing the 3, you by default have placed Zimmerman in with the same ilk as Byron De La Beckwith, Roy Bryant and J.W. Milam - REALLY??? - consider the inanity of what you're saying by simply recognizing that Zimmerman is contrite, sorry and wishes it had never happened, whereas Beckwith, Bryant and Milam never (as far as I'm aware) ever expressed an ounce of regret over what they did - so please stop with the nonsense.)" 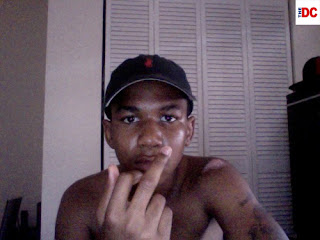 I've heard the most insane statements like, Zimmerman was Jewish and hated blacks. All coming from black people. Why are we going to war with this? I feel like black people want to declare war on all white people and using Trayvon Martin as a victim seems to be a good enough excuse. This type of mindset with many people leaves a bad taste in my mouth, one that kind of makes me hold back my involvement with anyone who is black. My experience has been nothing but vile and accusative of being a "racist" when I don't see or understand what they're so angry about. They place blame on so many things. I have had a huge debate with a black comedian (which some of my readers probably remember). He disrespected women on my Facebook page and he began to send us harassing emails. So I blogged every single hateful email he sent to me and his name in comedy went down the drain. I called him out on being the chauvinistic pig he was, but he said I was only doing that because HE WAS BLACK. Really? Now I know why certain communities stick together. We just can't mix and that's a damn shame. Why do people use the race card? Because it's easy and convenient when the facts aren't good enough.

If this post offends you, then you can "X" out and be done with me. Or, you can always use whatever race card you have left.

Want to add your opinion or thoughts on Facebook instead? Click here.
For more of Deb's articles, please visit: www.debrapasquella.com or join her on Facebook and Twitter. Check out her cooking blog for some of her famous recipes!
George Zimmerman protesting for Trayvon Martin race war racist Trayvon Martin Zimmerman Zimmerman Trial