So Who Rang the Bell? 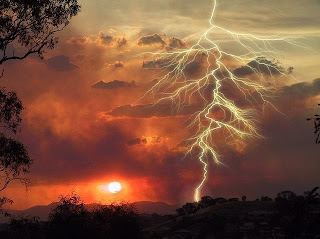 Last night I fell asleep right away, only to be woken up by the sounds of loud thunder and the flickering of the intense lightening. My dog raised her head and then hopped off the bed. Usually this means she has to go out. Mad took her out and I headed off into the bathroom before falling back asleep. As I came back into the bedroom to jump under the covers, I heard, "Debbayyy!" The way my father used to call out if he needed me. It sounded like it was coming from the stairwell. I turned to Mad and said, "Did you hear that? Turn down the TV," hoping that it would call out to me again, but it didn't. His voice was so audible and without a doubt, his voice! As I continued to listen to the thunder and rain outside, I fell asleep. In my dream, I saw Dad sitting at a big dining room table. I was in some sort of sunk in living room, where I would have to walk up a few stairs in order to get to him. He was covered in white light all around him, facing me, saying, "Well, c'mon! Whaddya' doin'? Get up here will ya?" I smiled and walked toward him, placing my foot on each step as I went into this huge dining room. You know how this goes. It always ends at the best part. I woke up and just smiled. He was so real, so incredibly visible and extremely audible. But I wonder, due to the anniversary of his passing, could it have been my mind playing a trick on me? Have I conjured up his voice, this dream, this feeling like he's around me lately? I told Madelene about my dream and she said, "Funny you should say that because as I was coming back inside from the laundry room. When I shut the door behind me the cowbell out on the wall starting to ring." We have this antique wood carving with a cowbell attached to it. A nice rustic piece that goes along with the house really nicely. But it never rings unless someone hits it. So Madelene opened the door, thinking that I was ringing the bell in order to get back inside, but no one was there. So, who rang the bell?

Not sure what I believe at this point. But it was very comforting to say the least. I'll leave it at that.

For more of Deb's articles, please visit: www.debrapasquella.com or join her on Facebook and Twitter. Check out her cooking blog for some of her famous recipes!
can our deceased loved ones visit our dreams ghosts RIP spirits