And Yet, Another Ailment 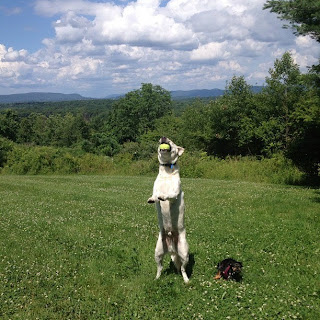 As I sit here and type, every joint in my fingers, hands, arms are going 'clickity-click-click'. I've been having joint pain really bad lately. It then progressed into my elbows, spine, legs, knees, ankles, toes - you get my drift. I found myself literally stuck in my bed screaming for help one morning. But let me just backtrack to last Friday. My sister came over with her two adorable dogs, which Lola goes nuts for. They're now a little 'pack'. My sis (being the little athlete she is) runs all three dogs up our incredibly hilly driveway and into the woods. Lola. loves. it. Anytime I say, "Is Aunt Carla coming over?" She'll immediately jump up and look for her out on the deck. As we were watching the dogs play together, we decided to take the little party over back to my sister's house. After a few cocktails, I found myself having the guts to walk the trails with my sister and the three dogs. Not only did I overexert myself because I haven't been active in quite some time, but I even jumped in the pool with all my clothes on because I wanted Lola to swim around. And what a little swimmer she is! The things we do for our kids, right? Evening was falling and so was I. My back started to ache with such intensity that I could hardly get out of the car when I got home. In 85 degree weather, I sat in the car with the seat warmers on high. Madelene had to help me up the stairs to get into bed. The entire week, I was in extreme pain. When Monday morning came, I was screaming like as if someone was murdering me. Mad sent me to the ER so I could get some pain relief. I hobbled into the waiting room to be checked in, clutching onto Madelene, shaking and crying. There were people in front of me with bruises or something minor to be looked at. A nurse saw my agony and moved me up to priority. They stuck me on a bed in the hallway of the emergency room in front of the nurse's station. They were packed to the gills. 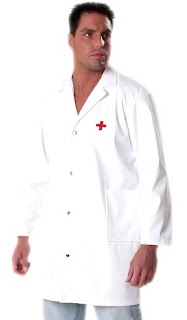 This handsome male nurse comes up to me and asks me a series of questions faster than an auctioneer. "Fevervomitingnauseadizzinessshortofbreath?" I just stared at him and said, "Oh c'mon! Do you really hate your job that much?"  He then said, "I'm sorry. I'm working with someone who is just extremely lazy today and I'm just stressed out." Every single other female nurse was all up in his business, flipping their hair and just basically swooning over him. Even as a lesbian, I could even see his sexy factor.  He gave me 30 mg of Toradol through an IV and then told me to pee in a cup. "Sir? I'm so crinkled up that I can't even reach 'there' at this point." He laughed and said, "Oh now you can. Trust me." So, I got up. I GOT UP. By myself. This Toradol had no 'dizzy' side effects --- just relief from all the pain that was in every. inch. of. my. being. I walked into the bathroom and did everything effortlessly. After taking some blood tests, they determined that I did not have rheumatoid arthritis nor did I have any lupus or viral infection that would have caused this pain. They chucked it up to "myalgia" - in other words, "I have no fucking clue what you have." Just like the good ol' "I don't know" diagnosis' like, "costochondritis", "spider bite" and "gastritis". It's an easy way out for the medical staff so they can release you and make room for the other poor sap with misdiagnosed ailments. Waiting to be released all depends on whose shifts are ending, and that can take up to an hour or more. While waiting there, I saw a whole lotta' shit go down. One lady hopped up on crack was screaming bloody murder, kicking the nurse in her side and spitting on the doctors. She had to be tied down into a bed meant for psychiatric patients. She was absolutely out of her mind. I was happy to leave, being able to walk by myself and hold a prescription for Toradol for later use.

But the agony didn't stop there. The pill form of Toradol ripped apart my stomach. I was spitting up blood and concerned that I was having internal bleeding. I had to stop taking it. The pain kicked into high gear again. While sitting on the couch, Mad started clutching her chest. "What's wrong?" I said, since she never complains about anything. Jolts of pain were making her hold her chest even tighter. It was pretty interesting how my pain temporarily left my body so I could jump up and grab three baby aspirins and then call 911, dreading to see the same faces who pick me up for chest pain. The operator was so mean and nasty, that I yelled at her, screaming, "Just bring a fucking ambulance!" She then said, "Do you have aspirin?" I said, "Yes, I gave her three baby aspirins. I'm no stranger to this protocol." She then said, "Take four aspirins out of the bottle and give them to her." I yelled, "I. DID. THAT. ALREADY!" She said, "Give her the FOUR ASPIRINS NOW!" So, I handed her four more aspirins. When the EMT crew came, they looked at me and said, "What's up Deb?" Embarrassing. "Not me this time, her." They raised their eyebrows and said, "Well we never came for you before." The other guy looked around and said, "Wow, I was never in this part of the house," making it seem as though they've been there more than a dozen times. (And they have.) I have to say, I was a bit proud of not being the victim here in some twisted way, until they asked Mad, "Well what were you doing yesterday?" She then pointed to me and said, "I was in the hospital with her." They just gave me this familiar look like, "No shit."  Anyway, they determined it was all muscular related and to just relax and take ibuprofen. They then sat down on the couches --no lie-- and spoke about THEIR ailments. They were a bit taken aback by the amount of aspirin she consumed. They told her to be careful and not injure herself because she wouldn't be able to clot easily, or at all. And to be careful about falling or injuring herself in other ways in fear of internal bleeding.

We made it out alive. We're still in pain but relieved it wasn't anything serious on both our parts. This morning I was able to take a much needed shower, wash my hair and dress up to do basically nothing. I will say this though: as much as I complain doing certain things that require movement, I will never take for granted my ability to move and function on a fairly decent level. After reading message boards on lower back pain and how sometimes, it never goes away where the person occasionally needs a wheelchair to get around, I'm going to complain much less. I'm going to enjoy every errand, every walk with my dog and even the occasional jump in the pool with my little chihuahua just to get her legs moving more. For now, please send some healing vibes for my wife and I - we're still not out of the woods yet, but we're trying our hardest. I'll write more when my carpal tunnel eases up. And yet, another ailment.

Want to add your opinion or thoughts on Facebook instead? Click here.
For more of Deb's articles, please visit: www.debrapasquella.com or join her on Facebook and Twitter. Check out her cooking blog for some of her famous recipes!
calling 911 chest pain chronic pain emergency room ER stories lower back pain myalgia Toradol