We're Never Gonna Survive, Unless We Get a Little Crazy 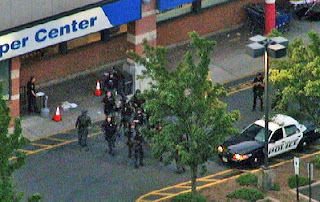 This morning I woke up with the news of a former employee of a New Jersey Pathmark killing three people before killing himself. He was a former marine prepared with an AK-47 and an automatic handgun. How many more shootings do we have to go through in order to officially say that this world has gone mad? This incident can take place anywhere, at any time, at any given moment. I always had a preparation plan in case an ex employee or crazy customer came barging into our office. I would turn off my overhead lights of my cubical, jump down, pull the chair in and hide under the desk...that is, if he or she didn't find me first. It's happening all over: in schools, in offices, in supermarkets, in malls and even recently in NYC at the Empire State Building. The man who started shooting in NYC looked like your average everyday office employee with a suit and briefcase doing his daily routine. You. don't. know. You can't pinpoint who's gonna lose it or not - it can be anyone. And if you think you don't know anyone who is indeed "crazy" -- look deep inside yourself. What would you do in desperate situations where your survival mode was your only hope? You lost your job, your husband, wife and family and now have to face solitude....alone. Who the f*** cares anymore? More than half of the people's mindsets would most likely kill the offenders and themselves, because well, they have nothing else to live for. That was their life. Now it's gone. Poof. If you're not one of them, you're in the minority sadly these days. 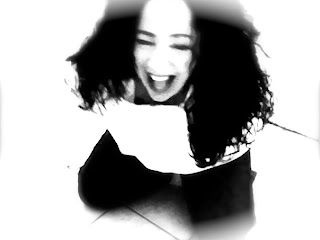 What does it officially mean to "be crazy"? Do we need a certified document from the doctor to give you this label? What if the crazed person never saw a doctor? What if "crazy" was brewing within the most "normal" person you've ever known? It happens. Crazy can build up and build up until the least expected lets loose like a cannon. I can give you a trillion instances, but you can just Google that on your own. What about "crazy exes"?  I admit, I've actually been one of them myself. Especially with obsessive thought patterns, egos torn, hearts broken -- you do things you normally wouldn't do, even if it isn't harmful. It's still seen as a little 'crazy' though. We've all had our little crazy moments, whether around people or alone. I've been suicidal too many times to count. I've had incompetent psychotherapists where at one time, I had lost a very good job, my long time girlfriend and felt I had no reason to live. My therapist was being condescending and making me angry with her asinine assumptions. So, I stood up from the couch and said, "You know what --- I'm going to walk out of here and slam my car into a stone wall and end it for good."  She stared at me thinking she knew me well enough that I wouldn't. I was bluffing, but there was a definite plan to drink myself into a coma at the local bar. "Very well then," she said, nodding her head, as she crossed her arms, letting me walk out the door. She never called the 'mental health cops' after me nor even checked up on how I was feeling - just a call the next morning to ask when our next appointment would be. She knew I would answer.

What else is crazy? Do you think "crazy" is killing in order to protect someone you love? I know without a doubt in my mind, that if someone broke into my home to harm us, my gun would be aimed for their heart -- or head. No leg wound. That's petty. You come in - you're going down.  I wouldn't give a rat's ass if I went in for man slaughter. As long as my loved ones are safe, I'm happy. End of story. Some would think that type of survival mode is "crazy" --- but is it? Am I alone in thinking like this? In fact, I'll take it a bit further since it is the first full blue moon in quite a long time. I think every single person should have a gun equipped on them at all times. Think about how much less shootings there would be since the 'crazy' guy knows everyone else is armed? I firmly believe the right to bear arms and think every home should be protected by someone who knows how to shoot a gun and knows how to keep that gun in a very safe place so nobody living there gets harmed. If you don't think it's important to save your family in that way, then I personally think you're crazy. The police sometimes take a very long time for your rescue. You think ADT is going to be your savior?  Think again. Get a gun. Learn to shoot. Save your family. That's my two cents.

Or is that just cwazy tawk'...  What do you think?

Watch this video - great twist at the end if you can figure it out... How many of you can relate to this just a bit if this happened to you. It's one of those types of videos you have to watch carefully.

If you cannot view this video above from another mirrored site, please click here.