Did Chick-fil-A Offend You?

There are a ton of posts on Facebook filled with outraged gays and lesbians screaming bloody murder about a cheesy chicken chain (cha-cha-cha) and their views on homosexuality. As I've said many times, who gives a flying rat's ass what Chick-fil-A's views are. If the chicken is good - eat it. Just wear a rainbow t-shirt when you walk in. Seriously though, the saddest thing I've witnessed with this b.s. were all the supporters lined up for miles just to grab a few legs or thighs having it to be a proverbial slap in the face for all gays and lesbians in the U.S. Half are saying, "Yes, we support your freedom of speech, your beliefs as a Christian and personal values."  Others are saying, "Yes, we support you hating fags!" And I use that term loosely because if you go onto their Facebook page, you will see many supporters using that term and drumming up more hate towards the LGBT community. But not all. Just some. As a Christian lesbian, I understand that the translations and personal interpretations of the Bible can get messy. If Chick-fil-A is going to be so "moral" about their stance against homosexuals, then they really should state their beliefs about premarital sex, divorce, as well as eating crustaceans of the sea (shellfish of any kind). 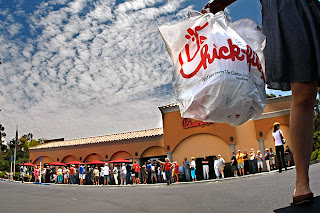 But I digress. Do we really care about what a couple of owners feel about other people's sexual orientations? If you're going to whine and moan about that, there are plenty of owners of well known establishments who do not agree with same sex marriage. Don't get me wrong, I feel terrible that it brought so many bigots out of the woodwork, but it's their freedom of speech. If you're that offended by them, then boycott the place and let the haters all dine together eating their greasy chicken sandwiches. I'm seeing people posting controversial opinions on Facebook, and once someone disagrees with them --- bam --- they're off their friends' list faster than lightening. My thing is -- if you're going to post controversial things on your page to your friends, get a blog or take the heat instead of whining like a big cry baby. Let the homophobes march in like a bunch of Nazis and tear into an undercooked filet of chicken. And yes, the one thing this has done was brought more business to this chain. The more gay whiners there are, the more haters start eating more chicken. See how this works? Life's too short to get offended by some idiotic opinion (which is my opinion), and like they say, opinions are like assholes. Everybody has one.