Getting Deeper Into the Grease of Chick-fil-A 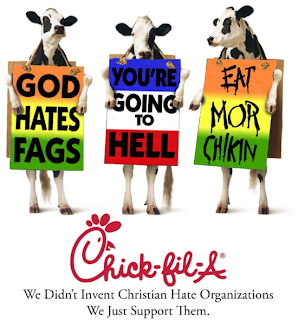 There seems to be a theme among many Christians: "I will be the judge of that..." And while Chick-fil-A has every right to believe what they believe, tons of people who are against gay marriage and who are entirely against anyone apart of the LGBT community have risen to the occasion to show their true colors. To tell you the truth, I have dealt with many people who believe homosexuality is a sin -- even those who threatened my own life over my beliefs (in the name of their so called God), but I really underestimated the amount of people who feel it's their job to judge others. Why are other people so concerned over how others live? And funny, they judge people of different religions or lack thereof. Didn't God give us free will? Didn't God say 'do not judge'?  Didn't God warn us about criticizing our brothers and sisters? I would love to take this opportunity to educate the low IQ clientele of Chick-fil-A with a few scriptures from their Good Book.

We may not judge in matters of opinion. "Receive one who is weak in the faith, but not to disputes over doubtful things. For one believes he may eat all things, but he who is weak eats only vegetables. Let not him who eats despise him who does not eat, and let not him who does not eat judge him who eats; for God has received him. Who are you to judge another's servant? To his own master he stands or falls. Indeed, he will be made to stand, for God is able to make him stand" (Romans 14:1-4). "But why do you judge your brother? Or why do you show contempt for your brother? For we shall all stand before the judgment seat of Christ. For it is written: 'As I live, says the Lord, every knee shall bow to me, and every tongue shall confess to God.' So then each of us shall give account of himself to God. Therefore let us not judge one another anymore, but rather resolve this, not to put a stumbling block or a cause to fall in our brother's way." (Romans 14:10-13)

I'm hardly upset over the owners of Chick-fil-A --- I'm appalled over the idiots who are supporting the company only to show their hatred and judgment upon other people in the name of GOD. It's disgusting actually. They grabbed an opinion of one Christian who owns a chicken joint and used it to belittle those who are different than them. It's the customers that are lacking the "Jesus light", as they claim to have. And while it's good to support someone for their freedom of speech, it's another thing to support someone only to make others feel lesser than another. What I mean is, it's OKAY to believe differently, as the Chick-fil-A owners do, but it's the customers' reasonings for supporting this. Lines and lines out the door just to say, "We hate you" to those who are gay or lesbian.  I'm not boycotting anything or anyone. If I'm hungry and your joint is the only place around, I'm going in. It takes so much energy to support something so silly and pointless --- as though anything is going to change by purchasing a chicken sammich' just to prove you're against "the gays".  If you truly know who you are in Christ, then you would be content that there are people who choose their right of 'free will' (which God gave them) -- who will not believe in "your God" and who are only to be judged by God Himself --- not you. Those are some huge shoes to fill if you're trying to play the role of God.

While you're dining at Chick-fil-A, don't forget to actually enjoy your meal and your company while seething over the ridiculous reason of why you're actually there. Bon appetit!