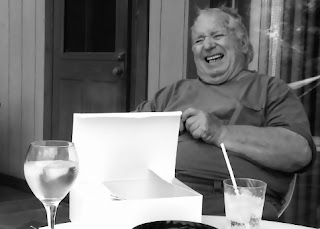 Of course I have to start off by saying, "by all due respect", but perhaps that would be a bit too formal. It's not that I don't have respect, because I have a ton of it -- possibly too much of it. Dad. I loved him. I still love him. It wasn't until my mid-thirties when he stopped me at the door from leaving, and then said for the very first time, "Hey, I love you, Deb." I was absolutely dumbfounded, not because he said "I love you", but because he hadn't said those words that meant so much to me my entire life. He wasn't a bad father - he was a great dad who always encouraged me and told me I was the best at what I did. He always said I should be doing something more profound with my life -- like become a famous movie star or cartoonist making millions. But, here I am, as my friend would put it, "small potatoes" living my life the best I can. His words still linger: "Ya' gonna be famous kid! Ya' too talented, I swear ta' Gawd!" And although the words felt so great to hear from him, I still longed for the father/daughter relationship that everyone bragged about. He was the family comedian, provider and a huge source of safety just knowing he was around. He was well known in the town we grew up in. "Oh ya' Charlie's dawta'??? Here, take this and send ma' regards," the Italian butchers would say as I walked out with twenty pounds of slaughtered meat around my shoulder. Everyone loved him. 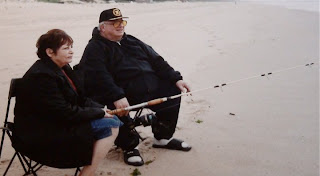 It seemed as though everyone in my family went fishing with Dad except for me. Dad would always talk about going to this river upstate to catch some fresh salmon or bass, but it never happened. I then took it upon myself to make it happen by booking a trip to Montauk, NY. Madelene and I rented a house right on the beach and took my parents. The fishing poles were onboard. Dad was excited to fish right on the oceanside or near the bay. "Ya gonna catch alotta' fish, kid."  The next morning from traveling the long dreaded Route 6 into the Hamptons, Mom had made this huge breakfast with coffee at 5am. Dad never fished any later than that. We had our breakfast and headed out off to path that led us right on the beach. The sun was starting to rise and Dad magically unfolded these awesome sturdy chairs he got from the shopping network that Mom always yelled at him for. We sat there, not talking much, but enough where it wasn't too uncomfortable. He pointed out the white caps and even a shark that was in shallow waters. We didn't catch a damn thing, but it was so cool to just finally have that moment I always wanted with him. During that trip, my parents both got to walk down by the beach while the sun was setting and both sat there talking and laughing. I captured the photo because for some reason, I always thought that it would be their last time on the ocean together. ...And it was.

There were countless times I couldn't go into whatever room he was in because he smoked so much. Even when he wanted to sit and chat with me, it was just too smokey for me. Sometimes, I actually believe he lit a cigarette just to get rid of me. But in the end times, he was finally excited to see me. I remember so clearly last year around this time, we were drinking a martini together and he held my hand and told me he loved me and what a great time he had while I was growing up. In my mind I thought, "Wow, we really didn't talk all that much while I was young" -- but his attempts of buying me things, like motorcycles, quads -- materialistic things --- he loved seeing me happy. He said the smile on my face was the reason why he did it. In my mind as a kid -- all I wanted to do was go fishing with him and get to know him better. Everything else didn't matter. But we always talked about the ride over to the places where we got these "things" -- and how much fun we had. I'd rather those moments in the truck with him driving and talking about motorcycles than actually receiving them as a gift.

The night he held my hand while he was talking with me was the night I got to tell him everything that I ever needed to tell him and more. This is why I feel complete in letting him go. I have no regrets and nothing that "I shoulda' said" that'll stick in my mind forever. I'm very relieved about that. Between our personal jokes, our intense communication this year and the time spent with him, I feel a complete sense of closure that makes my heart happy.  While I'm sad at the moment for this great loss, I'm happy that I know, and I believe that he is in a better place, without pain, without the medication that he hated so much and without the feelings of anxiety he suffered with so badly. There was no 'lack of forgiveness' to be given or taken by either of us. I finally found a friend in Dad the last year of his life. I don't think it was too late... I think it was right on time.

For more of Deb's articles, please visit: www.debrapasquella.com & join her on Facebook!