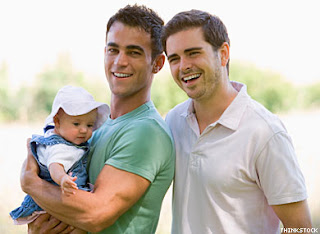 Lately, I've been getting random anonymous comments on a blog post entitled, "Is Homosexuality a Perversion". It happens late at night where I get a notification of someone leaving a comment on my blog. I have a tracker that tells me where they found my website. This person in particular Googled "is homosexuality a perversion" and found my site. It's the same person because they are all from the same town in Missouri.

Anonymous writes: "You can't reconcile a Christian lifestyle and a homosexual one. Homosexuals choose to practice perversion. The confusion lies in the distinction between a good friend with whom you have an emotional bond and someone you have sex with. People are confused and perverted. I know that a lot of people accept this lifestyle in this day and age, but that does not make it right. The vast majority of Germans agreed with Adolf Hitler in the 30s, and we all know how that ended up. I'm not comparing homosexuality to Hitler, just making a point about majority beliefs. Personally, I am an agnostic and I still believe that homosexuality is a perversion, as did Sigmund Freud. I also know that you can't call yourself a Christian and also wallow in a sinful, perverted lifestyle such as homosexuality. I have read the Bible front to back, and done extensive studies of some of the books, and I can tell you that both the OT and NT state in no uncertain terms that homosexuality and sexual perversion are sins. You can't say that it's all okay because Jesus died to save me from my sins. If you think about that logic you will see how ridiculous it is."

Nice comparison huh? I'm guessing this person has a few screws loose if they referred to Hitler in regards to a homosexuality and then tried to save themselves saying, "I'm not comparing homosexuality to Hitler" - but isn't this exactly what they're doing?  It's so amazing how people can be so narrow-minded and bigoted, especially to refer to gay and lesbians as "perverts", when there are so many heterosexuals out there that are perverts too. Promiscuity and a loving relationship are not the same. And yes, there are perverted gay people out there, but account for your team too. They're all not perfect. But I'm getting away from the point... Who in their right mind would reference Hitler in a homosexuality topic? Another comparison that really annoys me is when conservative Christians will compare gay people to pedophiles, rapists and murderers. And above all, these "conservative Christians" are all Googling topics about homosexuality. We're not evil - we're gay. Why not focus on bigger issues, like the ones listed in the Ten Commandments. And don't forget to Google a good shrimp scampi recipe, because we all know that crustaceans of the sea are all an abomination to God.

But "Anyonymous" goes on to say, "Just because you want to make excuses for your chosen lifestyle and try to pervert God's laws into your narrow interpretation, as a matter of faith it is evident that God requires us to love you as a person despite loathing your choice of lifestyle that does nothing but further separate you from Him. Ultimately, you have that "free will" that has been the bane of humanity as we all find times when the "spirit is willing but the flesh is weak". As with all, we pray for guidance for everyone and look for forgiveness for our transgressions when we truly repent. Being a Christian does not mean having to accept and condone every sort of deviancy and rolling over to those who argue for their deviancy. We will firmly stand for God's laws and resist the evil and corruption your lifestyle supports. Tough love." 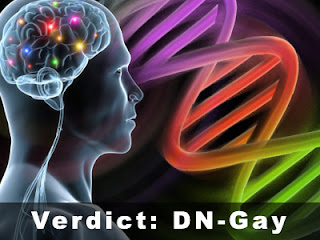 If I had to "choose" a lifestyle, don't you think I would have chosen the easier path? Being gay is not a choice and has been proven that it's genetic. Your "narrow interpretation" forgot this scripture... "Jesus said, 'Stop judging others, and you will not be judged. For others will treat you as you treat them. Whatever measure you use in judging others, it will be used to measure how you are judged. And why worry about a speck in your friend’s eye when you have a log in your own? How can you think of saying, ‘Let me help you get rid of that speck in your eye,’ when you can’t see past the log in your own eye? Hypocrite! First get rid of the log from your own eye; then perhaps you will see well enough to deal with the speck in your friend’s eye.'" {Matthew 7:1-5} I guess you missed that one. And I wonder what Jesus actually said about homosexuality. Can you give me the scripture where Jesus condemns it? ...Fact is, you can't because He didn't say anything about it. Amazing, huh?

What is a sin? As far as I’m concerned, the Ten Commandments still apply.

How about the seven deadly sins?

Nothing in that vast 'not to do list' involves anything that deals with homosexuality. As the Old Testament focuses on homosexuality being a sin, they also focus on many other things like eating shellfish and shaving off one's beard. The New Testament brings everything to light. Once Jesus died on the cross for us, the old law was abolished. Even in the New Testament, it states about homosexuality, but in terms of promiscuity, where people were having reckless sex and orgies, where they would get bored with man on woman intercourse and include anyone - even of the same sex. There is a huge difference between lust and love. There is a huge difference between a loving relationship between two people and random sex with anyone, anywhere.

“Accept Christians (or people of other religions) who are weak in faith, and don’t argue with them about what they think is right or wrong. For instance, one person believes it is all right to eat anything. But another believer who has a sensitive conscience will eat only vegetables. Those who think it is all right to eat anything must not look down on those who won’t. And those who won’t eat certain foods must not condemn those who do, for God has accepted them. Who are you to condemn God’s servants? They are responsible to the Lord, so let him tell them whether they are right or wrong. The Lord’s power will help them do as they should. In the same way, some think one day is more holy than another day, while others think every day is alike. Each person should have a personal conviction about this matter.” {Romans 14:1-5} 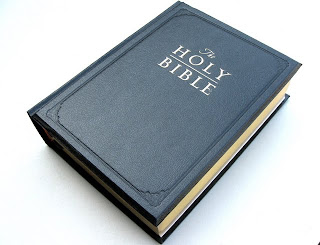 So, I would suggest to "Anonymous" from Missouri to do a little brushing up on the Good Book and maybe they'll see that God's forgiveness is much more than humans can ever provide us with. Jesus died on the cross for a reason: to take away the Old Law and free humanity of their sinful nature - sinful nature in terms of evil intent - to do harm - to hurt others or selfishly take what's not theirs. And if you want to argue with that topic alone, then you can read up on Galatians.

Since my wife and I are Christian, we no longer go by the Old Law as the Jewish people go by.

Look at Galatians chapter two verses 17 through 21: "But what if we seek to be made right with God through faith in Christ and then find out that we are still sinners? Has Christ led us into sin? Of course not! Rather, I make myself guilty if I rebuild the old system I already tore down. For when I tried to keep the law, I realized I could never earn God’s approval. So I died to the law so that I might live for God. I have been crucified with Christ. I myself no longer live, but Christ lives in me. So I live my life in this earthly body by trusting in the Son of God, who loved me and gave himself for me. I am not one for those who treats the grace of God as meaningless. For if we could be saved by keeping the law, then there was no need for Christ to die."

That one sentence says it all: {“For if we could be saved by keeping the law, then there was no need for Christ to die.”}

Then you have this passage: “You and I are Jews by birth, not ‘sinners’ like the Gentiles. And yet we Jewish Christians know that we become right with God, not by doing what the law commands, but by faith in Jesus Christ. So we have believed in Christ Jesus, that we might be accepted by God because of our faith in Christ-and not because we have obeyed the law. ***For no one will ever be saved by obeying the law.***” {Galatians 2:15-16} 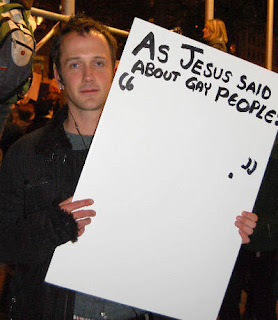 Relying on Jesus’ sacrifice is why love between two people is not wrong. The Old Law no longer binds us.  If you don't believe in the passages above, then you truly don't believe as a Christian that Jesus died for you. It's there in black and white and it's a shame that many Christians just see the word "homosexuality" and go right into a fit about it. Even if it was "sinful" as some believe, the fact that God has stated numerous times in the Bible not to judge others simply falls deaf upon most conservative Christians' ears. And while I still remain to respect those of different beliefs, it's  another thing to be beaten up constantly with the Bible, when I rely on that book to guide my life every single step of the way. And am I perfect? Not at all. I have a lot of work ahead of me, which is why I need the Bible. I'm a sinner, but it's not because I'm gay.  Now love each other as God commanded and stop focusing on what you cannot control. End world hunger, not homosexuality.

For more of Deb's articles, please visit: www.debrapasquella.com or join her on Facebook.
at August 20, 2012