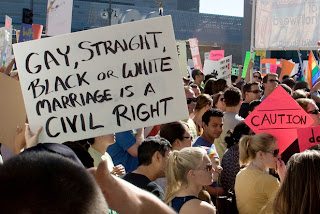 There is a big difference between "like" and "agree". For instance, I had a woman on my Facebook account write a quote from Rick Warren that stated, "Our culture has accepted two huge lies. The first is that if you disagree with someone's lifestyle, you must fear them or hate them. The second is that to love someone means you agree with everything they believe or do. Both are nonsense. You don't have to compromise convictions to be compassionate."  This is just like saying, if you "disagree" with blacks intermarrying with whites. It's not a matter of "agreeing" --- if you don't like something --- don't pipe in on what others prefer to do or how they want to live. It's none of your business to agree or not to agree. You can dislike it all you want. But what about disliking the Kardasian's wedding, Tiger Woods or Newt Gringrich's lifestyle? Just because all were straight - then yes - they're all accepted or, umm, "agreed upon".  Perhaps they didn't care for what they did, but hey, they're heterosexual so... 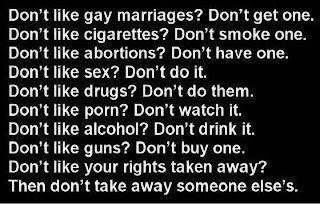 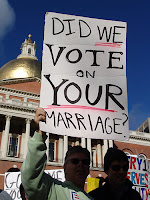 Which brings me to self-righteous idiots trying to take away the LGBT community's ability to marry one another - to have equal rights - to live happily without your approval. So, by you "disagreeing" with one's lifestyle, you are potentially taking away someone else's rights. To put so much energy into that, you must "fear or hate" them, as Rick Warren states. So your religion says it's a sin, right? My religion as a Christian says it's not. And if you think that's not the case, then put down your shrimp scampi and start shaving that beard (goes out also to the woman who posted this lovely quote) because that was the Old Testament that stated homosexuality was an abomination. All other scriptures in the New Testament are referring to promiscuity and lust, plain and simple. Premarital heterosexual sex is a sin. Judge yourselves before making a huge leap to judge others. People are so preoccupied with trying to make people "right" with God -- even if they don't believe in the same religion. Morons.