What a spectacular season premier of The A-List NY - “housewives with balls”, as they call them, on LOGO. I’m hanging on the edge of my seat every single second. If you haven’t seen the show, it gives you an idea of the gay community in an upper class environment. These are all hard working boys (and now gal), and of course, they play hard as well. I have had the pleasure of working with Ryan Nickulas, celebrity hairdresser and owner of The Ryan Darius Salon in NYC. My wife also gets her hair done by Ryan. He is an absolute pleasure to be around. No aires, no ‘acts to put on’ -- all genuine realness is what we've experienced. This goes for his best friend, TJ Kelly as well. After the season premier, I scrolled down Twitter and other networking sites plus Google to see what people were saying about the show. I understand when people don’t particularly like a show, they may comment briefly and then let it go. But these boys are really getting hit hard by jealous and resentful gay men. Most of all, many of the gay men who are dishing it out are also venting their distaste for the new cast member, Nyasha Zumicha, a successful straight & beautiful black woman who has managed to tangle herself up into the web of drama with the boys of The A-List NY. It was a dramatic entrance, but I think LOGO did some magical editing (plus a push to enhance upon her strong and confident personality) as well as made her appear more 'vicious' than she may be in real life. I’m hoping she’ll have many people surprised in the next few episodes, perhaps as a confidant to the crew as Ryan is. It’s too soon to tell. 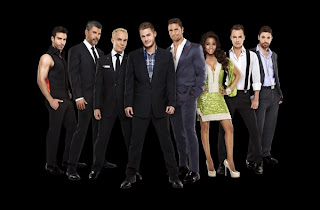 Article after article, tweet after tweet, I’m seeing such hateful comments by a ton of gay men. “The A-List NY does not represent any of us.” Then who does? Guys who spend their lives in clubs getting completely wasted to only end up in some bathroom stall for a quickie? Sorry, but if you’re looking for that type of show, hopefully Queer as Folk will come back on. These boys portray the given title, “A-List” --- helloooo? Maybe some viewers don’t know what that means. These boys are responsible, hard working and yes, wealthy gay men who have lots of drama in their lives, as we all do from time to time. (Some more than others...) In the spotlight, it’s a given you’re going to get negative feedback, but what I don’t understand is the resentment towards the “representation” of all gay men. Is it so bad to see gay men succeed in life? Is it so bad to see people actually loving their lives, yet dealing with a bit of drama? It’s refreshing to see this side of the gay community because frankly, I’m tired of seeing the same drab club and bathroom scenes. This show gives a touch of class to the community to show you how some gay men do live. And if people want to dish out their jealousy online and bash them for living a good life, then do your thing. It’s amazing to see so many reality TV maggots come up to the surface to spew their hatred for people who may not be exactly like them.

I give it two thumbs up - a must see!

Here is a home video of Ryan Nickulas giving my wife the best haircut ever.
If you can't view the video above, please click here.

And here is an interview I did with Ryan as well. This truly shows what an amazing person he is.
If you can't view the video above, please click here.

"Hatred is the coward's revenge for being intimidated." ~George Bernard Shaw

"Hate is all a lie, there is no truth in hate." ~Kathleen Norris

"You cannot hate other people without hating your self." ~Oprah Winfrey
You can also check out my article, "Your Haters Are Your Biggest Fans".