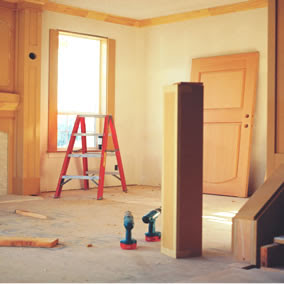 Every one of us have to go through some type of adaption phase, whether it’s a change of job, relationship or moving to a new location. Whatever it is, it’s not always easy. For some, it can be a relief - a happiness - ‘a long time coming’ type of transition, and for others, it can be the most frightening experience ever. Everyone’s different. I’ve done every one of these transitions mentioned above and I have come out of it alive, thank God. During the transition, it probably would have been best to wrap me up in a straight jacket and throw me in a padded room. Job change, relationship change, moving - all of those require time to adjust. All of them require patience. All require work - work towards sanity at some point. It’s especially difficult for me since I have zero patience and want everything done asap. ...Unrealistic. Since we have moved over to our new location, there have been a ton of things done, as far as renovating, which took time, money, patience, blood and sweat. You get the idea. And for some asinine reason, I thought once I stepped foot inside the house to actually “live” there, everything would be DONE. 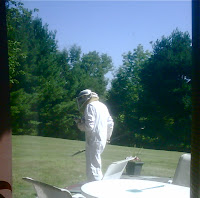 It’s the little things, from bee extermination, unloading 1,298.497,225 boxes, to losing things/finding things, bee extermination again because we’re infested to now waiting for another handyman to finish that same job to slam the rafters shut so they don’t fly back in. He got attacked by a swarm of bees, almost fell from our roof and sprayed chemicals into his eyes. A huge chaotic scene this morning. Our refrigerator broke just in time for our move, so we’re using a little ‘college’ fridge in the meantime and we’re trying to regulate airflow in here on the hot days since there are air conditioners only in select rooms. Our kitchen happens to lack an a/c unit, which makes it difficult to cook. So right now, we’re grilling or waiting later at night to eat dinner. No big deal, but frustrating. Central air for next year’s budget - a must. We did a ton of things before the move like ripping out carpets, sanding and polyurethaning the floors, painting a few rooms and trying to set up the best we can to be comfortable. When we moved in, it sort of took a left hand turn into Eternaltaskville. My wife wants to do everything she can’t do. And what I mean by that is - she hates hiring handymen to help or having someone else do it. “Here, let me do that.” So I let her. Every. single. thing. she puts together or tries to fix falls apart. I love her. I do. I really do. She hates when somebody tells her she can’t do something. So I don’t tell her that. I tell her, “Someone else can do that for you.” She still gets the hidden message. 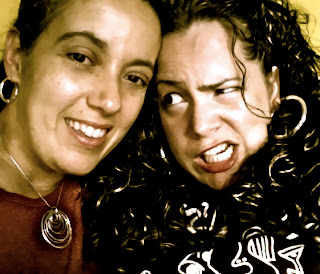 Of course, we can’t avoid the occasional arguments during our transition. (Occasional being a ‘nice’ term for it.) For instance: the movers want to charge $600.00 to move our furniture and packed up boxes. Once they arrive, my wife says, “Oh we’ll bring the boxes over ourselves.” Yes. Ourselves... In our tiny BMWs! It took two weeks - NOT exaggerating - to move the boxes. She lets any worker do half the job. Another instance: a carpet guy came in to remove the carpets and tacks - a very strenuous and tedious job. He did half and Madelene said, “Oh okay, we got the rest.” And we did the rest after bloody knees and blistered fingers. We paid them! Why not use them? But no, we have to do these things ourselves, which in a sense is good since I’m learning more about how to do labor type of things. But do you see where the arguments stem from? I’m not saying I’m right and she's wrong, but the conflict of interest is a huge factor here. And yes, I love her very much. She is too nice for her own good, but if you pay for help, let them help. Then we had to deal with Home Depot's contracted installers for our verticals and blinds. We had to request a different installer since she went ballistic on me over the phone because I called her at 9pm to set up an appointment. Home Depot closes at 10pm. She said, "Why the hell are you calling me so goddamn late?" I gave her a few choice words and advised her that maybe working for Home Depot isn't quite her forte. So Home Depot hired another contractor who came in, screaming and cursing at his helper for no good reason and then two days later, the entire vertical valance fell right onto the floor damaging a few of the slats that were very pricy. Those are uncontrollable circumstances, nonetheless a headache.

So right now I’m trying to “enjoy the journey”. Oh if I had a penny for each time I wrote about enjoying the journey I’d be a billionaire, but the fact is, sometimes it’s hard once you’re in the midst of something that you want done so badly. I have to say that in between these chaotic moments, I have been enjoying more time with my family and getting a lot of rest since it’s so peaceful and quiet here at night. I do have to start inviting some of my friends over & reconnecting because I have been wrapped up with everything going on here, that I'm missing out on the most important thing for me which is connecting with my friends. So please bear with me for now. I really can’t complain but my compulsive ‘get it done now’ side makes me such a bitch. I should really reread some of my own articles.
For more of Deb's articles, please visit: www.debrapasquella.com
Debra Pasquella home improvements relationships renovations