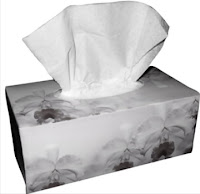 Many times, I’ve found that it can be extremely difficult to write during certain periods of my life, especially when I was separated or going through a breakup, it was hard to write down all of my feelings and share it with the world. It was emotional, raw, angry, sad, vulnerable - all things that would make a writer “great”, or perhaps relatable. I remember I had written a post called, “Napkins”. Many people commented or emailed me about it, but one of my favorite writers had text me and said, “Wow, that was a really powerful post, Deb.” I deleted it because I didn’t want the person I spoke of to be worthy of my ‘ink’, or perhaps to have the feeling that she has some sort of faux power over me. The one thing I have that she didn’t was a medium to outlet my feelings and get advice and comments. Although it was such a long time after we parted, I would sometimes get overwhelmed by unanswered questions, lack of closure if you will.

The reason why I’m writing this is because a wonderful poet on Twitter posted this incredible poem about crows. Of course, it was symbolic, but to me, it was one of her best pieces. I told her it was one of my favorites and she said, “I deleted it because I didn’t want to stir up anything.” I then thought about my old post, "Napkins" and said, “I understand.” And then I wrote to her and said, “Don’t let anyone stifle your creativity, don’t be afraid to write what’s brewing inside you.” But I did. I let someone stifle my writing. I was scared that everything would be interpreted because for her, in her mind, everything was about “me me me”, and I didn’t want to give her that satisfaction. But in the real scheme of things ---who cares? They can’t take away what’s inside you. They can’t stifle what’s already brewing, because eventually, one way or another, it has to come out. I’d rather it come out in this format rather than an indirect negative way.

A couple of years ago, when I first moved into our new place, it was very exciting, but also very sad because I was going through a hard time. I had lost someone special and yet, all of these good things were happening. Nonetheless, I found myself surrounded by tons of Kleenex tissues overflowing the waste basket, and even some that were on the floor. Mad would come home with boxes of tissues for me, since she knew I was sinking into a bit of a depression. The garbage bin explained everything. I never ran out though, she made sure I had enough tissues for every tear. I’d go grocery shopping, come home and unpack to realize that I had completely forgotten about picking up a box of tissues. When we went shopping together, I would say, “It’s always good to have these around for guests and such”, while grabbing a box of tissues off the shelf and throwing it into our cart. She knew. As time went on, the tears lessened, but periodically they still manage to make their way out.

Lately, I’ve noticed that we haven’t had a box of tissues in here for quite some time. I still have rough moments where I rummage to see if there is a box left in our pantry, but sadly...there’s none to be found. I then turn to the server in our dining room and grab a few napkins. It works, but my nose turns a bright rosy red from the thick papery texture, leaving me to shorten my crying session a bit, because I didn’t want to rub my skin off. The other day while grocery shopping, I saw the boxes of Kleenex. I stopped with my cart, looked at them, and then moved on. I knew that eventually, I would need them, but still kept walking away. Part of me wonders if it’s all because the pain has gotten less, or is it the fear of letting these painful tears out once again? Maybe by using the napkins, I’m somehow punishing myself for crying over something that was so long ago. I’m supposed to be over it. Yes, the pain does lessen and the tears do dry up eventually, but sometimes, the traumatic memories of being hurt and verbally abused can somehow creep up to the surface and tug at your most vulnerable chord, leaving you in a puddle of your own tears again. I’m learning now, that it’s not that I miss where I once was, it’s from the painful words that still echo in my mind from someone who claimed they once cared. How can someone you trusted so much turn against you so abruptly? And from the words of the person who hurt me: “Does it really matter?” That’s the response I got when I asked, “But why?”

Months, years after that response, I have stubbornly accepted her answer because no, it really doesn’t matter. Life is strange and unpredictable. Everything can be swept out from under your feet within seconds, while thinking you were so secure in your safe place. It’s a scary world with people who are unique, unpredictable and complex, but most of all, human. The fear of getting hurt like that again had great power over me. I let that fear take over my life, leaving me to limit my boundaries: I’d avoid any place that person would go to, even though we lived approximately ten minutes away from one another. About a year later I started to see her car drive past my complex. It started to get a bit routine, because I’d see her all the time, driving near where I lived and even into my neighborhood. I felt stalked and uneasy about it. While having dinner at a local restaurant with my mother, her car drove past, making a left hand turn into the back road behind the restaurant, and back out onto the other street so she can drive past once again. This happened more than ten times within twenty minutes. Oddly enough, she’s my biggest fan on Twitter, so I decided to tweet, “If you’re going to drive past again, just stop in for a glass of wine instead.” Why would she stalk me? I guess the answer lies within the question: “Does it really matter?”

Whatever the reason was of why this person decided to hurt me so badly and not explain the underlining reason for it---then I guess it really doesn’t matter, because the psychology behind it had given me many clues regardless. I’d like to think I’m not too naive, but I’d also like to think that I’m not presumptuous either. Just by her two year delayed reaction, I do have my answer somewhat, and content with using the napkins if I do feel overwhelmed by it.

I won't ever be stifled again.

"There's nothing to writing. All you do is sit down at a typewriter and open a vein." ~Walter Wellesley "Red" Smith