For me, writing has always been a great therapeutic outlet. It has also been a great sounding board to where many other writers and readers will interact and tell their opinions about whatever the topic is about. During the years, I have been friends with Tamar, a long distance runner, who had decided to put her running experiences and short stories of her own onto a blog. We initially met as coworkers at the phone company back in 1999. I remember Tamar showing me her short stories printed out on a piece of paper, or written in an email about what she had experienced while running on the trails nearby. I couldn’t put down the stories - I was addicted to her writing. She then had written other stories that I was so excited to read because through her experiences, she made it entertainment for everybody reading it. It was then I suggested that she should write it all out on a blog and have a little site to jot all of her incredible stories on. It’s not all about running either, there are dating stories and more personal revelations about who this wonderful woman is. Tamar and I became friends, but more so, became family. She has shared many Christmas Eves at my home, while celebrating Chanukah along with my family. Long talks over sushi and sake and fabulous get togethers at many places have been so much fun with her. Her passion is running, as well as many other things, such as writing, painting and traveling. 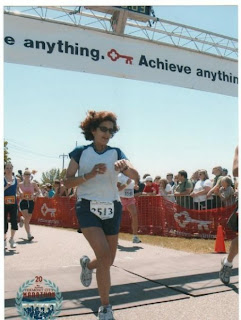 It was then, I had met Myriam, another long distance runner, a mother of two and also, a cancer survivor. She is a director of an important running club and has raised funds for the Leukemia and Lymphoma Society. In Myriam’s blog, she writes about everything, from her personal emotional struggles to the challenges of running. She has a talent of collaborating her personal life stories with the goals and achievements, as well as the rewards of running. She’s not afraid to put her heart out there. We’ve become close friends this past year, and have had long talks over wine, inspiring one another with the many posts we have written. Through getting to know one another, we have developed this warped sense of sarcasm in our joking around that makes other people wonder if we’re really serious. It’s funny to ‘pretend bicker’ with her in front of those who don’t 'get' our humor. Myriam has made me laugh so hard at times that I nearly pass out. She has helped me with many struggles of my own. I don't know what I'd do without her! (Yes Myriam, that hurt to write that on my blog!)  Her passions are running, writing, a good glass of red wine, and most of all, celebrating her life with her family and friends. 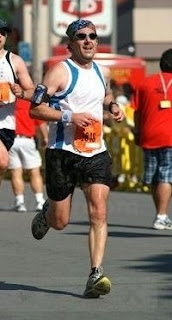 It was then, I had met Todd through blogging as well. Todd is also a long distance runner. He was initially friends with Tamar first. That’s when we began reading one another’s blogs. Tamar, Myriam and Todd all know one another through running. We all live within a close proximity to one another which makes it all the more easier to get together. I’ve had a lot of good conversations with Todd. His writing reflects his personality on every level. He’s deep and very spiritual, always questioning life instead of defining it. Todd’s stories about his encounters with people are always fascinating because he not only experiences funny things, but analyzes human behavior in a comedic way. He never mocks anyone while writing about them, but he likes to get a grasp on why people do the oddest things or why people are sometimes mean-spirited. Todd usually holds a bright smile when you greet him and always up for a good intellectual conversation. His passions are running, his two boys, Conor and Brett, writing, spirituality and life to its fullest.

And last but certainly not least, is Parveen. This is one of my strangest encounters, because for one, I had mistaken her months ago for being my wife. See, we live right across the street from one another. One evening as she was walking toward her building, I thought to myself, “Why is Madelene going into that building?” I really believed it was her! And then, as I found out it wasn’t.  I realized that this woman across the way was my neighbor. She would walk her dog every evening around 7pm, while I sat on my deck sipping wine. We never bumped into one another oddly enough. On my last blog entry, that dealt with the neighbors who live behind me, I had received a comment from her, indicating that she was my neighbor too. We then became Facebook friends, exchanged numbers, realizing the friends we had in common.  Parveen is another runner. She knows Todd and Myriam as well.  Small world.   She also just started a blog that is very interesting with various topics. She is a 3rd grade teacher and has been for thirteen years. She is originally from Canada and has moved around six times after that, with her last stop being in New York, right across the street from me. Since I have just met her, I have yet to get to know her. She seems like a wonderful person, who I may be meeting for the first time this evening if my schedule allows me. Her passion, as far as I know right now is running, writing and the ability to teach and help kids.
So I encourage you to visit each of their blogs and see for yourself how much passion they have for what they do in life.
blogging Debra Pasquella runners running