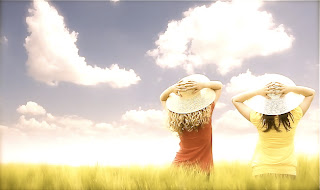 The other day I was asked if I had any “straight friends”. It was apparent that this person had not seen beyond the small scope of my sexual orientation, but rather, she chose to see what she wanted to see. My answer of course, was a “yes”, however my wife and I mingle with anyone who we click with - not just because of a sexual orientations.   Many heterosexuals feel that the gay and lesbian community only surround themselves with “their own kind” - which kind of sounds like some bizarre species of sorts, but that is so far from the truth with me. In fact, most of my interactions and are with straight people and not because I choose to, but because I focus more on the person and not their preferences.  Most of my readers are straight. But the thing is, I never even thought about it, until this person had asked that question.

For me, I don’t think, “gay”, “straight”, “bisexual”, “transgender”, or “polyamorous”. I don’t care what people do, or who they choose to love or even if their orientation changes for whatever reason that may be. Love is love. Friendship is friendship. I don’t intentionally go out looking for gay and lesbian friends. That goes for religious backgrounds too. Even though I’m Christian, I like to spend my time with people of various faiths or even, the lack thereof. I spend time with people of extreme political views as well. I do this also because I learn so many things from different people.  I learn a little bit every day by the different views and lifestyles people have. It’s a big world out there, why limit yourself?

Another big assumption I have found with many straight women is that lesbians, whether they are in a monogamous relationship or not, or if they solely seek mates that are “true lesbians” (because many of them prefer that), --straight women always have in the back of the minds, “Will she hit on me?” Of course this is all depending on the individuals involved, however I can only speak for myself as well as some people who are close me: no.  We hardly ever hit on straight women--ever.  I do flirt in jest sometimes, letting somebody know “wow you look hot in that” - but that’s just my personality. If I think someone looks good, I will throw them a compliment. This does not mean I want to throw them into bed. I had a few straight women feel that I had a crush on them all because I complimented them. Automatically they thought I was after them. Some even made sure they looked good around me in order to fish for compliments. Some, even tried making me their guinea pig.

I even want to tackle the big “no no” of all time. Men: Do not tell a woman who is a lesbian that you could change her around. I don’t care if you are Julio Iglesias or Adrian Grenier, you are not going to change our sexual orientation. (Ok, well maybe Adrian can do it for me...) Personally, I think men are beautiful, just as women are. I’m just not sexually attracted to men. But the assumptions that come from “some” men are stunning when they think they can change us around. I’m sure some of you men can do that, but if the woman's orientation is stable and they are not bisexual, it is going to be that much difficult. Please note - not ALL men do this, I know that.   Just a few men who are pretty self-absorbed do, which really lights a fire under my ass.

So moral of the story? If you are trying to get to know someone on a friendly basis as well as on a personal level, try looking beyond their lifestyles, orientations and outer appearances and realize that there is much more to a person than what is presented. If you only judge by what you see, you might lose sight of their deeper found uniqueness.
Debra Pasquella gay and lesbian LGBT stereotypes