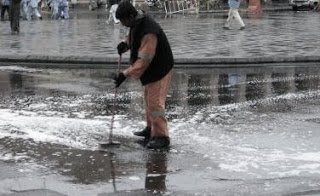 Maybe it’s the reflux problem I’m having, but people are annoying me more than ever lately. I do realize that I get very irritable when I feel sick or extremely tired, but sometimes, there is just no excuse for certain individuals. I’m going to start with dipshit #1. There is this guy that works for our management office who is absolutely bizarre and traveling along his own world. He’s about 60 years old or so, kind of muscular but a bit ratty looking. He arrives at the office about 7am with heavy gangster music blasting from his Dodge Durango. The man has white hair for the love of God and appears to be either Irish or ---just really white. Anyway, aside from my judgmental views of him, I’m watching him take a broom and push the water off the walkway that leads into management office. As he’s pushing the water aside, the heavy rain is falling back down to replace it all. I feel like opening my window right now and yelling down some a few choice words. Go inside and listen to your gangster music. All I hear is, --swooooooosh---swooooosh---swooooosh.

Dipshit #2 was in my doctor’s office. She was clearly sicker than a dog and had her little girl sitting next to her. Of course, I was on the other side of the room, trying not to breathe in her swine or whatever it was she was plagued with. It started when her phone rang very loudly. She fumbled around inside her purse to find it, as it continued to play the most annoying canny music that would have dogs miles away lined up at the door. If that wasn’t bad enough, she talked as if no one else was in the room. A few people started scratching their heads or rubbing their eyebrows in disbelief of her very loud conversation that spoke about coffee pots and linoleum floors. I felt like saying, “Must you?”  Some people really don’t give a rat’s ass about anybody’s comfort levels in public.

Which brings me to Dipshit # 3 & 4. This was a seemingly new couple displaying their passion in public. I had to walk inside a CVS pharmacy to pick up a few things. When I had gotten in line, the couple in front of me were groping one another to the point of it being illegal. Of course the cashier had problems up front, which made us stand in that dreaded obscene line even longer. I looked over at the other girl waiting behind me and she popped her eyes out at me as if she was saying, “Do you see that?” I’ve never quite understood public displays of affection to that extreme. I can see two people holding hands or maybe a peck here and there, but when it gets downright obnoxious, it’s just rude.

Other than that, I haven’t really gone out all that much because of my stomach problems lately. I seriously think when I’m not feeling well, I notice all sorts of annoying stuff around me, but when I am feeling good, I don’t notice all the b/s that goes on. There might be something to that. Just like when people are having a shitty day, they’ll take it out on people. I guess I’m doing that on a blogosphere basis.