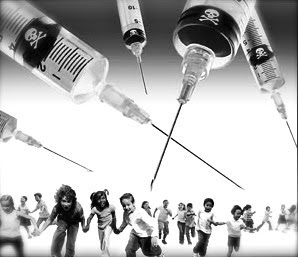 In fear of sounding like an alarmist, I just want to say that I’m only asking questions here and that I don’t necessarily feel one way or the other...just yet. Yesterday, I went online and checked out the schedule for my local pharmacy’s flu vaccination times. I have acute asthma, which is triggered greatly by the flu or irritants, such as smoke, mold spores and chemically induced vapors, especially pet hair and dander. I sometimes even find myself in the emergency room hooked up to a nebulizer machine and electrolyte and anti-inflammatory bags, along with a high dose of steroids. With the wonderful combination of uppers and downers provided, it’s enough for me to say: “Gimme’ the flu shot NOW!”  The thought of the H1N1 virus is quite alarming to me, as to most of us, however from what I’ve been hearing, this vaccine isn’t something to take lightly.

While Googling through many websites, I’ve found tons of what it seemed to appear as anti-conspiracy theories of many articles and videos regarding the swine flu vaccine. They all said pretty much the same thing: DO NOT TAKE THE SWINE FLU VACCINE! They were telling stories about the past when the pandemic hit the world back in the 1970’s and how people were affected greatly by taking the swine flu vaccine. It caused such nerve damage to some, that they were at times, paralyzed for life. Others had died from the vaccine, and now, they are blaming Baxter, the pharmaceutical company for a huge scandal for distributing the wrong vaccine which had the H5N1 virus with a deadly human version of the bird flu. There are many other claims of scandals to which the Baxter representatives have either lied to protect the company or have came out to the public telling people the “truth”.  But, who’s lying? Are they disgruntle ex-employees or are they people who truly want others to know the truth about this vaccination and the horrors about their company?

I found another video by a 37 year old female army engineer. She stated she had information that was quite alarming while being on a drill. Her theory is: in time, the government will force us to take the vaccination and then place a shackle or, “bracelet” around our right hand indicating that we have received the swine flu vaccine. If we refuse, we will be taken off into quarantine, or for a lack of better words, a “concentration camp”, as this woman described it. Now, this woman on the video below is a Christian who believes that the antichrist has arrived and that we are going to be marked with the number of the beast on our hands. Basically, she feels that we are at the end of Revelations - so take this video with a grain of salt, but take it as you want to. That’s up to you. I have mixed feelings about this, due to my faith in Christianity as well as government anti-conspiracy theories that I sometimes find myself wondering: is this really true?


The next video is from 60 Minutes back in November of 1979. Does history repeat itself?