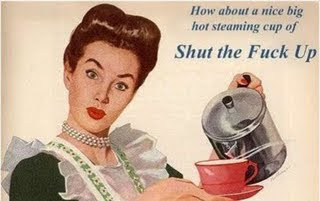 Have you ever made a conscious decision to maintain friendship with someone you particularly don’t care for? What I mean is - have you ever stayed friends with someone out of reasons of guilt, or feeling that you “should” be friends with them because they’re inside your circle of friends? There are people that we’re going to like and not so like. It happens. Sometimes you just have to wonder: is it all worth it?  See, my problem is that there are people in my circle of friends that I may highly disagree with on certain topics, but when it gets down to brass tacks and that person starts preaching to me as if it was the end all be all ---I tend to run. I understand that I’m always going to find myself disagreeing with certain things about opinions and whatnot and vise/versa, because let’s face it - that’s life, but when someone is so in your face about something, it’s time to step out of that circle and pluck that one weed that’s been strangling your daisy.

Facts are facts and opinions are opinions. Mix them up in a bundle of philosophical bullshit and you get exactly that: bullshit. It’s merely a way of twisting an opinion into a downright fact, in “their” opinion. When someone tells me I “should” do something, because it would be better for me, maybe fact would have it that it’s part truth and of good intention, but if it’s not an option for me or my lifestyle, then that so called “truth” becomes a mere suggestion. I love writing and feel that it’s a therapeutic outlet for me. I also feel it may be for other people, however I’m not going to shove the art of writing down anyone’s throat, just as I wouldn’t shove Christianity down anyone’s throat either. It’s a matter of preference.

My mother thought I should go and marry a Jewish doctor. My teacher thought I should be an accountant because I was good with numbers. My art teacher suggested I take something else up because I was failing his class, yet I was an artist and other people have liked my work. Other people are so good at suggesting what’s best for “you”, yet they have no clue what’s best for themselves. That’s baffling in itself.  Another pet peeve I have is when someone takes over an entire conversation with self-righteous believes/bullshit, I tend to drift off and automatically push the proverbial ignore button. It’s just like trying to convince a liberal left wing patriot that recycling is no good and global warming is only a myth.
Preach it to another choir.

I’ve always thought I was a ‘good ear’ when it came to listening to my friends or just being there to help them with whatever they were going through, however lately, I’ve been finding out that there is a continual process of draining every bit of energy I have by the nonstop pity parties that I’ve been invited to. I understand people have problems and they need someone to talk to. Get a therapist like I do. It’s okay to vent and get some good feedback from a good friend, but remember, while you’re doing this, you may also be stepping the boundaries of friendship. Friendship doesn’t necessarily mean “free therapy”. Keep in mind that your friend may be going through his or her own thing and may need some space in between your bouts of drama.

It’s all about balance.

There are some friendships that allow for more ‘therapy time’, and that’s solely up to the two people involved. It’s just a known thing between the two of them. But if you are one of those types of people who find yourself telling your life story to a new friend or a mere acquaintance and you’re wondering why people are not hanging out with you as much as you would like - try being more considerate and leaving your drama, self-righteous suggestions and preaching at home.
Debra Pasquella drama friendships mental exhaustion