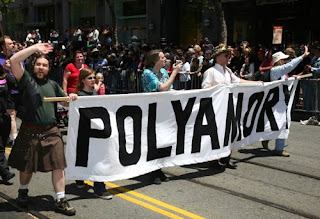 There are so many miserable people out there criticizing other people’s lives for whatever reason. Maybe they don’t like the way they live: “They’re gay and that’s a sin”, “She works as a waitress and doesn’t apply herself, she can do so much more with her life”, or “Oh dear Lord, they have an open relationship - they can’t possibly be happy!”  What works for someone may not work for somebody else. And, that’s okay. Somebody recently asked me why I don’t work for IBM anymore or hold the conventional 9-5 job. For me, it’s not my bag anymore. It caused me great anxiety, and my quality of life was suffering. No amount of money could ever make me want to go back. I’m totally content and yet thrilled with freelance work, even though it may not pay on a steadily basis. When people are not happy with their own lives, they live vicariously through yours, picking and sorting out what should be “right” or “wrong” in their eyes, even suggesting what you “should” or "should not" do.

A couple of friends of mine who are bloggers went out the other night and discussed the word “should”. We discussed how umm, it “shouldn’t” be used. It’s very difficult not to interject the word “should” when talking about things such as, health, love, relationships and just life in general. The word “should” creeps out automatically. I bet you anything that you can’t leave the word out. We’re so used to saying, “You should eat more fruit”, “You shouldn’t eat too much red meat”, “You shouldn’t drink alcohol”. Of course, all of these are “good intentional” suggestions, but what if someone already has their daily intake of fruit and the other person needs more iron than the next with low cholesterol - should they stop eating red meat? Alcohol, well, as the old saying goes, everything in moderation, right?

Last night, my wife and I watched a show called, “The Secret Lives of Women” which dealt with people who lived polyamorous lives. All of the couples as well as single people dating a few other mates, whether it be male or female, were all very happy and content living that way. Their raw honesty was so overwhelmingly refreshing: no excuses, no explanation other than, ‘this is me’. One person who disagreed with their lifestyles simply said, “To each their own” ---I hate that expression when someone is trying to condemn another person in the most ‘respectful’ way. It’s cliche and overused in order to say, “Well, I sure as hell wouldn’t do that!” And that’s fine. It’s not “you”. Most of these people were your average everyday folks who lived normal lives, had good jobs or lived in the fast lane working in prostitution ranches that were clinical, where they routinely performed disease control screening tests before “business transactions”.

Here are the bios of the people that were on the show:
Click here for more info.
“Not all women marry the man of their dreams and live happily ever after. For these four women, one man just isn’t enough!

Christa has been married to Ken for eight years. The first few were monogamous, but one eye-opening evening with her husband and a female stranger led to a revelation: she likes women and doesn’t mind sharing her husband with them. Now they have an open relationship. Christa is currently dating two women, and both she and Ken freely indulge in one-night stands. Eventually they plan on having kids and settling down, but until then, nobody is off limits.

Keysha is in a committed relationship with long-term boyfriend Mike. Together, they raise two kids. Mike understands when Keysha doesn’t feel like being romantic, even if she’s had the energy to do so all day. You see, while there is only one Mike in Keysha’s life, there are many “Johns.” Keysha is a prostitute at the famous Kit Kat Ranch in Nevada and to make a living, she can be with over a dozen men a day. What’s different about this open relationship though, is that it’s strictly a professional one… the world’s oldest, to be exact.

Birgitte is a painter living in New York City. A main source of artistic inspiration for her is her lovers. Luckily for admirers of her work, she has no shortage of muses. Birgitte is polyamorous, which literally means “many lovers”. She is also the leader of Polyamorous NYC, the East Coast’s largest poly organization. From cuddle to pool parties, Birgitte has a wealth of love to share in the city that never sleeps.

For former banking professional Dee Dee, the dream of being her own boss and fulfilling her sexual fantasies on a weekly basis has come true. Dee Dee’s lifestyle as a Swinger has led to the opening of “Black Rose Swing Club,” a full service bar for those who enjoy no-strings-attached sex. If you ever want to grab a drink from a lingerie clad bartender, take in some pole dancing, or enter a wet T-shirt contest while seeking a partner for the night, this happily married wife of twenty years is the person to call.”

I respect these people more than the ones that secretly go off and cheat on their spouses, possibly bringing home an unknown disease to their significant other. I’m not sure if this is a new fad or just something that the term “swingers” has evolved into. Regardless, I respect people who honest and make no excuses for anyone. Like I said, there are too many miserable people out there - I’m glad there are some out there making their life worthwhile. Never let anyone judge you, and if they do, you’ll already know what type of life they lead.
Any thoughts?
Debra Pasquella open relationships polyamorous polyamory The Secret Lives of Women