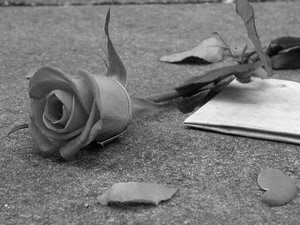 Isn’t it odd sometimes when you come across a person who seemingly shares the same things you do, or they’re going through similar struggles or happenings in their life that you’re going through also? I immediately assume that they already know me or someone is trying to spy on me. I kick into paranoia mode. There have been times where I’ve been stalked. Once it was an ex-boyfriend who would park his car behind the garage of my parents’ house and spy on me in my bedroom. I caught him twice. The third time he was caught was on the private road where I lived with my parents. He claimed he was there just to smoke a joint without being on the main road. He wasn't the type to do drugs, so I was suspicious.  He lived twenty minutes away - couldn’t he have found a place between here and there?

Back in February of 2006, I had a reader of mine who was very “enthusiastic” about my blog. She would comment here and there and then try messaging me through my AIM account, which I used to have available. Our chats were frequent, but I detected something “off”, so I blocked her for a couple of months because it was too ‘hook line & sinker-ish’ if you get my drift. After a few months and many comments left on my blog, I unblocked her and we started chatting again. This time, I got the whole, “My partner and I are not doing very well and she doesn’t do this and  doesn’t do that she doesn’t work she doesn’t take the garbage out, she drinks too much she yells too much, and she she she she!!!” (Again you get my drift.) I felt bad for her and decided to talk with her about it.  Instant messaging chats eventually turned into phone chats, which then turned into therapy sessions of me listening to her cry hysterically over her partner and me sitting there trying the best I could to help her.

May came along, and Madelene and I were about to take our annual vacation to Provincetown, MA to get away for a bit. When I woke up in the morning in our bed and breakfast, my cell phone had 10 or more voice mail messages on it and I received many emails as well. It got to the point where I really had to call her back, because she was crying in most of them. At one point, I was having lunch at a bar & grill with Madelene and had to step outside to take a call from my new friend who was going through a rough time with her partner. When I heard her voice, she was crying hysterically over the fact that we hadn’t spoken in two days. This alarmed me because she was no longer crying over her girlfriend - she was now crying over me. She said, “I know you’re with your girlfriend on vacation but I miss you and needed to talk to you.” My instincts told me to back awayyyy from the phone, but instead, I talked to her and tried to help. Her emotional outbursts were so believable and so sad that I couldn’t possibly leave her in that state of panic. My turkey club could wait.

Then I got this email which said: “I have had a hard time talking to you this week because I MISS you and I don't want to be annoying while you are with your girlfriend on your yearly vacation. I've been trying to give you space and respect. All I really want is to be in Madelene's shoes...even if just for a day. Now you've taken down all your videos and are calling me internet buddy. I know I mean more to you then just that...why are you so willing to toss me out? Please, Deb...please talk to me."

Red flags went up and I started getting scared. I took down all my videos and some of my blog posts because I was absolutely horrified, yet this was someone I had trusted; a person I didn’t even know because we connected so wonderfully at times and then other times it was sort of creepy. I explained to her over the phone that I will not live my life like this and that she cannot disrupt my life, interrupting our vacation. I made it clear that we were just friends and that she was, in fact, just an “internet buddy”. It was too scary for me.

She then convinced me with her believable ‘well disguised composure” that she was just needing a friend and apologized profusely. I accepted her apology and she was a bit more tame with our friendship. We ended up hanging out in person and she became a very good friend, knowing nothing else would transpire. Eventually, her true colors came out, which caused my entire life to turn upside down. To make a long story short, she absolutely tried taking Madelene’s place and ended up stalking us. She would park her car outside until 4am, waiting for me to come out and talk to her. I never did. Madelene and I had to leave our previous location and moved into a condo downtown. My friend would drive by and park in the lot for hours, until I started calling the police because I was scared for my life. Another time she came over and started unpacking boxes of things I had purchased for her on the ground. It was her dramatic way of saying she accepted that we were no longer friends. I got so frustrated that I grabbed the wooden part of a broom and bashed every single piece of whatever she had left in that box into shreds and pieces. I went crazy and let her see for herself that enough was enough.

Back to present times: I hope those of you who feel that I’m a bit distant in our friendships and especially those who have pointed this out to me, please know that I am totally paranoid because of my past experience with all this. I love my friends and I do want a buddy to go out and have coffee with on a regular basis with, but my “closeness” or vulnerable side has a huge wall up, which makes me appear as standoffish, when I’m actually really interested in the person(s) and what they have to say or offer. I hope this blog post explains my limited social interaction with some of my closest friends. It’s getting better everyday, however there are small bits of paranoia still stuck in the back of my mind. It’s almost post traumatic in a way, but I realize now there are sane people out there who just want to be friends without stalker-like characteristics.
being stalked Debra Pasquella stalkers